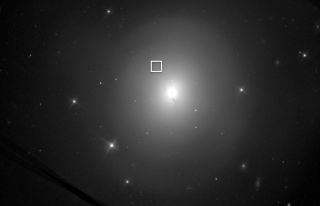 This is the deepest image ever of the site of the neutron star collision. The white box highlights the region where the kilonova and afterglow were once visible.
(Image: © Wen-fai Fong et al, Hubble Space Telescope/NASA)

Back in March, astronomers pointed the Hubble Space Telescope at a distant point in space where two neutron stars had collided. Using Hubble's giant eye, they stared at that distant spot for 7 hours, 28 minutes and 32 seconds over the course of six of the telescope's orbits around Earth. It was the longest exposure ever made of the collision site, what astronomers call the "deepest" image. But their shot, made more than 19 months after the light from the collision reached Earth, didn't pick up any remnants of the neutron-star merger. And that's great news.

This story began with a wobble on Aug. 17, 2017.  A gravitational wave, having traveled 130 million light-years across space, jostled the lasers in the Laser Interferometer Gravitational-Wave Observatory (LIGO), the gravitational-wave detector that spans the globe. That signal followed a pattern, one that told researchers it was the result of the merger of two neutron stars — the first neutron-star merger ever detected. Gravitational-wave detectors can't tell what direction a wave comes from, but as soon as the signal arrived, astronomers worldwide swung into action, hunting the night sky for the source of the blast. They soon found it: a point on the outskirts of a galaxy known as NGC4993 had lit up with the "kilonova" of the collision — a massive explosion that flings rapidly decaying radioactive material into space in a brilliant display of light.

Related: 8 Ways You Can See Einstein’s Theory of Relativity in Real Life

A few weeks later, NGC4993 passed behind the sun, and didn't emerge again until about 100 days after the first sign of the collision. At that point, the kilonova had faded, revealing the "afterglow" of the neutron-star merger — a fainter but longer-lasting phenomenon. Between December 2017 and December 2018, astronomers used the Hubble to observe the afterglow 10 times as it slowly faded. This latest image, though, showing no visible afterglow or other signs of the collision, could be the most important one yet.

That "time series" amounts to 10 clear shots of the afterglow evolving over time. The last image of the series, showing that point in space without any afterglow, allowed them to go back to the earlier images and subtract out the light from all the surrounding stars. With all that starlight removed, the researchers were left with unprecedented, extremely detailed pictures of the shape and evolution of the afterglow over time.

The picture that emerged doesn't look like anything we'd see if we looked up into the night sky with just our eyes, Fong told Live Science.

"When two neutron stars merge, they form some heavy object — either a massive neutron star or a light black hole — and they are spinning very rapidly. And material is being ejected along the poles," she said.

That material takes off at blistering speeds in two columns, one pointed up from the south pole and one from the north, she said. As it moves away from the collision site, it bangs up against dust and other interstellar space debris, transferring some of its kinetic energy and making that interstellar material glow. The energies involved are intense, Fong said. If this were happening in our solar system, it would far outshine our sun.

Much of that was already known from earlier theoretical studies and observations of the afterglow, but the real importance of Fong's work to astronomers is that it reveals the context in which the original collision happened.

"This is a nice piece of work. It shows what we had suspected in our work from earlier Hubble observations," said Joseph Lyman, an astronomer at the University of Warwick in England, who led an earlier study of the afterglow. "The binary neutron star did not merge inside a globular cluster."

Globular clusters are regions of space dense with stars, Lyman, who wasn't involved in the new effort, told Live Science. Neutron stars are rare, and neutron-star binaries, or pairs of neutron stars orbiting each other, are even rarer. Early on, astronomers had suspected that merging neutron-star binaries would be most likely to turn up in regions of space where stars were tightly clustered and swinging around one another wildly. Lyman and his colleagues, analyzing that earlier Hubble data, turned up some evidence that might not be the case. Fong's image showed there's no globular cluster to be found, which seems to confirm that, at least in this instance, a neutron-star collision doesn’t need a dense cluster of stars to form.

An important reason to study these afterglows, Fong said, is that it might help us understand short gamma-ray bursts — mysterious blasts of gamma rays that astronomers occasionally detect in space.

"We think these explosions might be two neutron stars merging," she said.

The difference in those cases (on top of astronomers not detecting any gravitational waves that would confirm their nature) is the angle of the mergers to Earth.

Earth had a side view of the afterglow of this merger, Fong said. We got to see the light rise and then fade over time.

But when short gamma-ray bursts happen, she said, "It's like you're looking down the barrel of the firehose."

One of the jets of escaping matter in those instances, she said, is pointed at Earth. So we first see the light from the fastest-moving particles, traveling at a significant fraction of light speed, as a short flash of gamma-rays. Then the point of light will slowly fade as the slower-moving particles reach Earth and become visible. (No one's yet matched a short gamma-ray burst to a gravitational-wave signature of a neutron-star merger, however.)

This new paper, to be published in  Astrophysical Journal Letters, doesn't confirm that theory. But it offers researchers more material than they've ever had before for studying a neutron-star merger's afterglow.

"It is a good advertisement for the importance of Hubble in understanding these extremely faint systems," Lyman said, "and gives clues as to what further possibilities will be enabled by [the James Webb Space Telescope]," the massive successor to Hubble that is scheduled to be deployed in 2021.