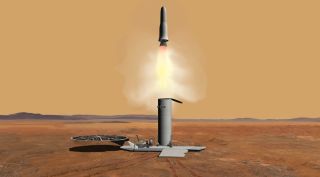 An earlier concept for a Mars ascent vehicle, which would transport samples collected from the Martian surface into orbit. Those samples would be returned to Earth by another spacecraft.
(Image: © NASA/JPL-Caltech)

WASHINGTON — Despite a new emphasis on a streamlined, "lean" sample return architecture, a NASA official says it's unlikely that suite of missions will be able to return Martian rock and soil samples to the Earth before the end of the 2020s.

"Our hopes are that the 2020 budget will increase so that we can actually start serious planning and moving towards doing missions for a sample return," he said. The White House is expected to release its fiscal year 2020 budget proposal in mid-March.

NASA's fiscal year 2019 budget requested $50 million to support work on future missions after the Mars 2020 rover, with an emphasis on planning for missions that will collect samples cached by Mars 2020 and return them to Earth. The report accompanying the final fiscal year 2019 spending bill, signed into law Feb. 15, didn't mention how much of the nearly $2.8 billion allocated for planetary science would go to such planning, but Meyer said he understood there was "some additional money for studying sample return."

NASA unveiled a concept in 2017 called "lean sample return" intended to simplify and lower the cost of future missions to retrieve and return samples collected by Mars 2020. One mission would land near the Mars 2020 site and use a rover to collect samples, loading them into a small rocket that would launch them into Martian orbit. A second mission would grab the sample canister in orbit and return it to the Earth, perhaps in the late 2020s.

Neither the lander to retrieve the samples nor the orbiter to return them to Earth are formal NASA projects. The agency currently has no missions on the books after Mars 2020 and, in its 2019 budget proposal, kept projected funding for future Mars mission planning at a notional $50 million a year through the early 2020s.

Asked at the MEPAG meeting if NASA has a planning date for when those future missions would return samples, Meyer didn't rule out getting them back in 2029, but sounded skeptical that would be possible.

"I think the earliest possible date that we could hope for sample return is 2029. I think that is tough," he said, in part because of budgets. "I think the real answer may be 2031, and a lot of that depends on when we can get started."

Meyer said that NASA also plans to start working soon on a strategic plan for Mars exploration, which will support planning for the next decadal survey in planetary sciences in the early 2020s. The goal, he said, is "to have a program that isn't just sample return but also what else we should be doing at Mars in the coming decade or two."