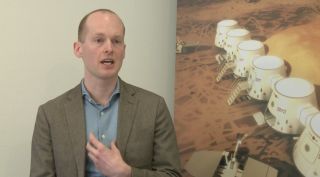 Bas Lansdorp, founder of Mars One, confirmed the bankruptcy of the venture's for-profit arm, Mars One Ventures AG, but said he was working with administrators and a potential investor on a way to rescue it.
(Image: © Mars One video via YouTube)

WASHINGTON — The company that was to finance Mars One has been liquidated, dealing a severe setback to the venture's quixotic goals of one-way human missions to Mars.

Mars One Ventures AG, the commercial arm of the overall Mars One effort, was liquidated in a Jan. 15 case in a civil court in the Swiss canton of Basel-Stadt, according to a Jan. 16 filing by the canton’s commercial register. The filing was first publicized Feb. 10 on Reddit.

The filing offered little information about the bankruptcy case or how the company was liquidated. Bas Lansdorp, founder of Mars One, confirmed that the company was bankrupt, but provided few additional details.

"We're working with the administrator and an investor to find a solution," he said in a Feb. 11 email, but said he couldn't publicly discuss the status of those efforts at this time.

Mars One has an unusual structure involving two organizations. One is the Mars One Foundation, a non-profit organization responsible for implementing its goal of establishing a permanent human settlement on Mars. The other was Mars One Ventures AG, which held the exclusive rights to monetize the project through such things as the sales of sponsorships and broadcasting rights, providing a share of those revenues to the Mars One Foundation.

Lansdorp emphasized that the bankruptcy filing affected only the for-profit company, Mars One Ventures. However, with the collapse of that company, financing of the non-profit foundation is uncertain.

Mars One has provided few financial updates since it announced in December 2016 that Mars One Ventures had gone public after an acquisition by InFin Innovative Finance AG, a Swiss firm previously working on mobile payment technologies that was already traded on the Frankfurt Stock Exchange. The last shareholder update by Mars One Ventures was published in June 2018, according to the investor relations section of its website. At the time trading of the stock had been suspended on the Frankfurt exchange, with hopes of resuming it in August.

Mars One gained headlines several years ago with plans to privately finance human missions to Mars, with those selected to fly on those missions committing to a one-way trip with no prospect of return to Earth. In its 2012 announcement of its plans, Mars One said it expected to have people land on Mars in 2023, a date that it has subsequently delayed to no earlier than 2032.

Mars One claimed it could pull off the initial mission, through the landing of the first four-person crew on Mars, for $6 billion, a figure the organization offered few details about and one widely criticized in the broader space industry as far too low. Mars One planned to raise the funds for the mission by selling broadcasting rights, citing the large revenues generated for the rights to events like the Olympics and the World Cup.

There was considerable response from people interested in flying on such missions, even if Mars One overstated those numbers. It claimed in September 2013 that more than 200,000 people had applied to its first astronaut selection round. That figure, though, applied only to those who started the process and did not include those who actually completed their application forms and paid the application fee. No more than a few thousand actually completed their applications, from which Mars One selected 1,058 at the end of 2013 for further consideration.

By February 2015, Mars One had narrowed the number of finalists for its first astronaut round to 100, who were to participate in additional screenings, including training at a simulated Mars outpost. However, that training has been delayed, and Mars One has not provided recent updates on how it will continue the astronaut selection process.

Plans for precursor robotic missions also suffered delays. Mars One awarded study contracts in 2013 to Surrey Satellite Technology Ltd. (SSTL) to develop an orbiter to serve as a communications relay, and to Lockheed Martin for a Mars lander based on the design for NASA's Phoenix mission. However, activity on those projects ground to a halt by early 2015 after the companies completed their initial studies and did not receive funding for additional work.

Mars One announced in December 2016 that those missions, initially scheduled for launch in 2018, had been delayed to 2022 for the lander and 2024 for the orbiter, but has since provided no further updates on their development.

Asked Feb. 11 if he could provide any news about the astronaut selection process or other Mars One Foundation activities, Lansdorp responded, "No news from the foundation at the moment."