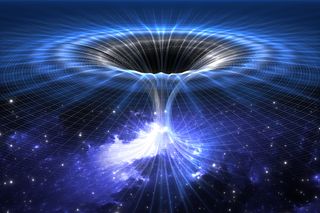 Diagram of a wormhole.
(Image: © Shutterstock)

Weird star wiggles could betray the presence of wormholes, if these fabled space-time tunnels do indeed exist, a new study suggests.

Wormholes are sci-fi staples; over the years, many stories, books and movies have sent their protagonists zipping between widely separated locales via these cosmic shortcuts. Wormholes are possible, according to Einstein's general theory of relativity, but nobody has ever spotted one.

The new study provides a possible way to make the first tentative detection: look for slight but strange movements of stars.

"If you have two stars, one on each side of the wormhole, the star on our side should feel the gravitational influence of the star that's on the other side," study co-author Dejan Stojkovic, a cosmologist and professor of physics at the University at Buffalo in New York, said in a statement. "The gravitational flux will go through the wormhole."

Wormholes require extreme warping of space-time, which in turn depends on very powerful gravitational forces. So, a good place to hunt for these theoretical tunnels is near the supermassive black holes that lurk at the cores of galaxies — such as Sagittarius A* (pronounced A-star), the four-million-solar-mass behemoth in our own Milky Way, Stojkovic said.

"So if you map the expected orbit of a star around Sagittarius A*, you should see deviations from that orbit if there is a wormhole there with a star on the other side," he said.

Current observing techniques likely aren't sensitive enough to make such a detection at the moment, he added. But it may be possible to do so in the next decade or two with advances in instrumentation as well as long-term monitoring of appropriate target stars, such as S2, which circles near Sagittarius A*.

Don't get too excited, however; such a detection, if astronomers ever manage to make one, is unlikely to be a slam dunk.

"When we reach the precision needed in our observations, we may be able to say that a wormhole is the most likely explanation if we detect perturbations in the orbit of S2," Stojkovic said. "But we cannot say that, 'Yes, this is definitely a wormhole.' There could be some other explanation, something else on our side perturbing the motion of this star."

And there's some more bad news on the space-exploration side: Wormhole travel will probably remain a mere sci-fi dream for a very long time, if not forever, Stojkovic said.

"Even if a wormhole is traversable, people and spaceships most likely aren't going to be passing through," he said. "Realistically, you would need a source of negative energy to keep the wormhole open, and we don't know how to do that. To create a huge wormhole that's stable, you need some magic."

The new study, which was led by De-Chang Dai of Yangzhou University in China and Case Western Reserve University in Ohio, was published earlier this month in the journal Physical Review D.