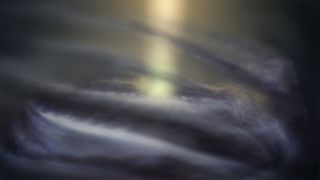 This artist's impression shows a ring of cool interstellar gas around the supermassive black hole at the center of the Milky Way, Sagittarius A*.
(Image: © NRAO/AUI/NSF; S. Dagnello)

For the first time,  astronomers may have imaged the cool disk of gas surrounding the gigantic black hole at the heart of the Milky Way, a new study finds.

The research may improve knowledge about how black holes grow and influence their surroundings.

At the hearts of most, if not all, galaxies are supermassive black holes millions to billions of times the mass of the sun. These enormous structures can have profound effects on the galaxies they call home — for example, they can blast out jets of matter at nearly the speed of light that can travel across an entire galaxy, likely shaping the galaxy's evolution.

At the center of our galaxy lies the supermassive black hole Sagittarius A*, often abbreviated Sgr A*. This giant is about 4 million times the mass of the sun and about 14.6 million miles (23.6 million kilometers) in diameter.

Around Sgr A* swirls a ring of debris known as an accretion disk. The gas within this disk experiences so much friction that it can reach 18 million degrees Fahrenheit (10 million degrees Celsius), according to researchers on the new study. Previous research has detected X-rays near Sgr A*, likely given off from this hot gas.

Prior research suggests that Sgr A* was also surrounded by relatively cool gas, with temperatures ranging from about minus 280 degrees F to 17,500 degrees F (minus 170 degrees C to 10,000 degrees C). However, it remains uncertain how much cool gas surrounded Sgr A*.

"If we want to learn about what processes are important and not important for how a black hole gets fed, we need to know the environment around the black hole well," study lead author Elena Murchikova, an astrophysicist at the Institute for Advanced Study in Princeton, New Jersey, told Space.com. "But the contribution of cool gas on a black hole has never been studied."

Now Murchikova and her colleagues suggest that they may have imaged the cool accretion disk around Sgr A* for the first time. "This should help improve our understanding of how accretion onto black holes works," she said.

Scientists used the Atacama Large Millimeter/submillimeter Array (ALMA) in Chile to analyze the center of the Milky Way. Specifically, they focused on wavelengths of light given off by hot ionized hydrogen gas that could make it all the way from the heart of the galaxy to Earth, with very little loss of these light signals along the way.

The researchers detected a disk of cool gas about 20,000 times the diameter of Sgr A*, and estimated it was about one-tenth the mass of Jupiter, or about 30 times the mass of Earth.

The scientists detailed their findings online June 5 in the journal Nature.