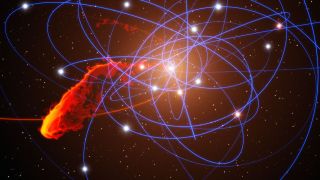 This illustration shows the gas passing the black hole. The orange cloud is G2, and the blue lines represent the orbits of nearby stars around the supermassive black hole. The black hole's gravity shapes the behavior of every object in its neighborhood.
(Image: © ESO/MPE/Marc Schartmann)

DENVER — Astronomers watched a high-speed gas cloud slam into the matter getting sucked toward Sagittarius A* — the supermassive black hole at the center of the Milky Way — and then zip away into space. Now, careful observations have revealed just how much the gas cloud, which astronomers named G2, slowed after the collision.

That measurement tells scientists something important: the density of the hot matter surrounding Sagittarius A*, which is the nearest known supermassive black hole to Earth. SagittariusA* (SagA*) is quiescent, meaning it's not gobbling up a huge disk of matter and firing off jets. But there's still something hot and glowing surrounding it that physicists don't understand very well. The collision with G2 is offering astronomers one of their best clues yet as to what that glowing ring is made of.

"There was this drag force. The thing [G2] became slower," said Stefan Gillessen, an astronomer at the Max Planck Institute for Extraterrestrial Physics in Garching, Germany. [9 Ideas About Black Holes That Will Blow Your Mind]

G2’s deceleration proved that there was something substantial in the immediate vicinity of the black hole for G2 to crash through, Gillessen said.

Physicists detected that slowing-down using data from the GRAVITY collaboration at the Very Large Telescope (VLT) in Chile. GRAVITY brings together infrared light from all four telescopes of the VLT to make one extra-sharp image. That allowed the researchers an unprecedented view of an object's near-miss with a black hole.

"So of course it was fun to watch, but now we've turned it into something useful," Gillessen told Live Science. "We have actually measured the atmosphere around a black hole at a radius, which was completely inaccessible before."

G2 is a strange object itself: a blobby mass of warm gas that might have a star system or two at its center, but isn't gravitationally bound by anything obvious, Gillessen said. Instead, it flows fluidly along a close, elliptical orbit around SagA*, and it gets very close to the black hole at one end.

Back in 2015, scientists knew G2 was about to make its closest approach to the black hole. And at the time they thought it might create some fireworks by falling into the black hole itself. That didn't happen, which disappointed some observers at the time. But it did offer Gillessen and his team a chance to make the speed-change measurement.

Gillessen and his collaborators published their measurement Jan. 25 in The Astrophysical Journal, and Gillessen presented their findings at the April meeting of the American Physical Society in Denver.

They had suspected G2 might slow down because of another cloud, called G1. G1 was already moving away from the black hole when it was discovered, along a similar but smaller and slower orbit to G2. The team suspected the two might be linked, and that G1 was moving slower because it had recently been through a close encounter with the black hole's atmosphere.

And when G2 struck the glowing ring surrounding SagA*, it too slowed down, though not quite as much. The difference, the researchers suggested, might be due to G1 having already cleared a path for its twin. G2, which, because of its high speed, had been on a more than 300-year-orbit around the black hole, has now slowed down and is on a much shorter orbital path, they found. It should take just 50 years to loop back to its closest approach. It will fall into the black hole entirely by the 2150s.

Using models of the collision, the researchers showed that this slowing down suggests an atmosphere of roughly 4,000 particles per cubic centimeter at a distance 1,000 times the radius of the black hole's event horizon. That's much less dense than Earth's atmosphere, but still significant. That's data that astrophysicists modeling the dark, quiet black hole at the center of our galaxy can use, Gillessen said. And SagA* is a hot topic right now. It's the next black hole the Event Horizon Telescope (EHT), which recently produced the first image of black hole M87, will capture. Thanks to SagA*’s quiet nature, it will be a very different one from the black hole the EHT has already seen.

Now, scientists know a bit more about what its immediate neighborhood looks like.