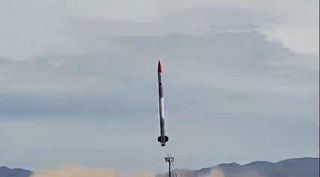 The Texas-based company launched the Suborbital Autonomous Rocket with Guidance, or SARGE, rocket from Spaceport America in New Mexico at about 12:45 p.m. Eastern time March 2. The launch had been scheduled for early January but postponed twice because of issues linked to the partial government shutdown.

John Quinn, chief operating officer of Exos, said in a later email that engine shut down when it hit a limit for instantaneous impact point (IIP) on its trajectory. The vehicle is designed to shut down its engine during ascent if it runs the risk of impacting outside a "safety circle" seven kilometers in radius around the launch site. That's intended to protect the major buildings at Spaceport America, including the hangar for anchor tenant Virgin Galactic, that are 7.1 kilometers away, and lowers the company's insurance costs.

The rocket's control system wasn't good enough to overcome high winds on ascent that threatened to push the instantaneous impact point outside the safety circle. "As the winds buffeted the rocket the gimbal correction was insufficient to keep it close enough to center of the circle to keep the IIP within the 7 km circle," he wrote.

Despite missing its planned altitude, Quinn said the flight was otherwise successful. "This was a great test. Any flight where Exos and its payload customers can walk away with another set of data and an intact vehicle/payload makes for a good day."

Exos says it will move into regular commercial operations of the SARGE vehicle, but didn't state when their next launch would take place. The company also plans to use SARGE as the basis for an orbital launch vehicle called Jaguar able to place payloads weighing up to 100 kilograms into low Earth orbit.