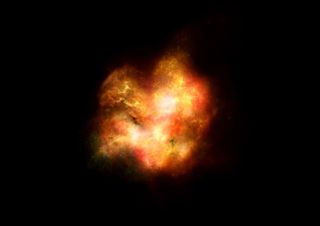 This artist's illustration shows what one of the very first galaxies in the universe might have looked like. The galaxy is largely opaque and without a clear structure, because high levels of violent star formation and star death illuminate the gas filling the space between stars.
(Image: © James Josephides (Swinburne Astronomy Productions))

By staring at the sky for over 200 hours, the Spitzer Space Telescope collected light that finally reached Earth after a 13-billion-year voyage through space.

This light left its origin so long ago that researchers studying this imagery are essentially peering back — way back — in time, to the ancient cosmic past.

Using Spitzer data, a research team observed 135 distant galaxies and found that these celestial bodies, which formed over 13 billion years ago and just 1 billion years after the Big Bang, were brighter than expected. Researchers coupled their Spitzer findings with archival data from the Hubble Space Telescope in a recent paper published in the Monthly Notices of the Royal Astronomical Society.

Related: This 13.5-Billion-Year-Old Star Is a Tiny Relic from Just After the Big Bang

These 135 galaxies were particularly bright in two wavelengths of infrared light, which was created by radiation mingling with galactic gases like hydrogen and oxygen, according to a statement released May 9 — showing that the galaxies were releasing a high level of so-called ionizing radiation. When this type of radiation in the early universe hit abundant neutral hydrogen, it ionized it — imparting charge and kickstarting what's called the Epoch of Reionization, which coincided with the first stars' formation.

One of the biggest questions in a branch of astronomy that studies the origins of the universe, observational cosmology, is the mystery behind what produced so much of this ionizing radiation that it affected all the hydrogen in the early universe.

''These new findings could be a big clue,'' Stephane De Barros, lead author of the study and a postdoctoral researcher at the University of Geneva in Switzerland, said in the statement .

These new results provide details about how the universe was evolving at this billion-year mark, but more research is needed to understand even farther back to the first stars, which were generated earlier than Spitzer can peer back.

The team suggested in the statement that the James Webb Space Telescope project, which includes a science mandate to study this era of cosmic time, could provide the missing links to these and other questions about the origins of the universe.

The new work was detailed April 4 in the journal Monthly Notices of the Royal Astronomical Society.