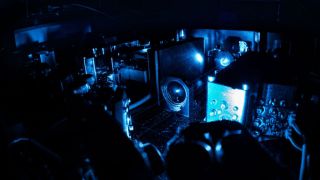 A bubbling, raucous vacuum fills quantum space, distorting the shape of every hydrogen atom in the universe. And now we know that it also distorts hydrogen's bizarro-world antimatter twin: antihydrogen.

Currently, antimatter appears to be the perfect, antagonistic twin of matter, and one of the great mysteries of physics is why matter came to dominate space as antimatter became a bit player in the universe. Finding some difference between the two could help explain the structure of the modern universe.

The Lamb shift was a good place to look for that sort of difference, said Makoto Fujiwara, a Canadian particle physicist affiliated with CERN and co-author of the new study, published Feb. 19 in the journal Nature. Quantum physicists have known about this strange quantum effect, named after University of Arizona physicist Willis Lamb, since 1947. At the first major postwar conference of American physicists, Lamb revealed that something unseen inside hydrogen atoms pushes on their internal particles, creating a greater gap between the proton and orbiting electron than existing nuclear theory allowed.

"Roughly speaking, the Lamb shift is a physical manifestation of the effect of the 'vacuum,'" Fujiwara told Live Science. "When you normally think about the vacuum, you think of 'nothing.' However, according to the theory of quantum physics, the vacuum is filled with the so-called 'virtual particles,' which are constantly being born and destroyed."

That uncanny bubbling of brief, half-real particles has real impacts on the surrounding universe. And inside hydrogen atoms it creates a pressure that separates the two linked particles. The unexpected discovery won Lamb the 1955 Nobel Prize in physics.

But while physicists have known for decades that the Lamb shift altered hydrogen, they had no idea whether it also affected antihydrogen.

Fujiwara and his coauthors wanted to find out.

"The overall goal of our studies is to see if there is any difference between hydrogen and antihydrogen, and we do not know in advance where such a difference may show up," Fujiwara told Live Science.

It suspends the substance in magnetic fields that repel matter. ALPHA researchers then hit the trapped antihydrogen with laser light to study how the antimatter interacts with the photons, which can reveal hidden properties of the little anti-atoms.

"Currently, there is no known difference between the fundamental properties of antihydrogen and regular hydrogen,"  Fujiwara said. "If we find any difference, even the tiniest amount, it would force a radical change in the way we understand our physical universe."

Though the researchers haven't found any differences yet, antihydrogen physics is still a young field. Physicists didn't even have any easily studied samples of the stuff until 2002, and ALPHA didn't start routinely trapping hydrogen samples until 2011.

This discovery is a "first step," Fujiwara said, but there's still a lot more left to study before physicists will really understand how hydrogen and antihydrogen compare.