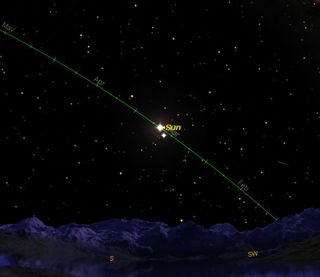 The green line is the path (orbit) the Earth makes around the Sun. Shown is the Sun's location along this ecliptic line as of March 20, as seen from Earth. The other bright object is Mercury.
(Image: © Starry Night)

Avid "Seinfeld" fans might remember the episode when Jerry's friend, George, was desperately trying to find a way to postpone his impending Christmastime wedding with his fiancee, Susan. He finally comes up with a solution:

"Have the wedding on March 21 - the first day of spring!"

Unfortunately, if George had gone through with the nuptials (and Seinfeld aficionados know why he never did), he would have been a full day late. You see, in America, spring no longer falls on March 21. In 2005, for instance, the vernal equinox, the first day of spring for the Northern Hemisphere, comes on Sunday, March 20 at 12:33 GMT, or 7:33 a.m. EST (4:33 a.m. PST).

Now this doesn't seem right. I mean, when we were all growing up, the first day of spring was always on March 21, not March 20, right? Now all of a sudden spring comes on March 20.

How did that happen?

While it's true that we've traditionally celebrated the beginning of spring on March 21, astronomers and calendar manufacturers alike now say that the spring season starts one day earlier, March 20, in all time zones in North America. Unheard of? Not if you look at the statistics. In fact, did you know that during the 20th Century, March 21 was actually the exception rather than the rule?

In the years 2008 and 2012, those living in Alaska, Hawaii and the Pacific, Mountain and Central time zones will see spring begin even earlier: on March 19. And in 2016, it will start on March 19 for the entire United States.

There are a few reasons why seasonal dates can vary from year to year.