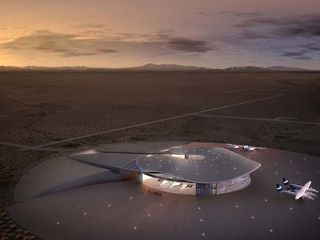 Spaceport America is to blossom in New Mexico, a commercial venture to support suborbital and orbital access to space of passengers, satellites, and cargo. It is to be home base for Virgin Galactic's suborbital spaceline operations.
(Image: © URS/Foster + Partners)

The FAA/ASTissued the license after providing a vital Environmental Impact Study Record ofDecision required for construction to begin on the sprawling spaceport.

There havebeen a numberof political hoops to move Spaceport America closer to reality.

Forexample, the New Mexico State Legislature set certain requirements forspaceport funding, which included the formation of a local tax district, theissuance of an FAA Environmental Impact Statement record of decision and launchsite license, and a signed lease agreement with an anchor tenant.

SpaceportAmerica is expected to cost a total of some $225 million to construct.

Accordingto NMSA Executive Director Steven Landeene, all is now on track to startspaceport construction in the first quarter of 2009. Furthermore, the NMSA isexpected to have a signed lease agreement with Virgin Galactic later thismonth.

?A few issues remain that are being worked. We anticipatelease signing prior to the end of the year,? he told SPACE.com.

Along withVirgin Galactic, Spaceport America has been working with a host ofaerospace firms such as Lockheed Martin, Rocket Racing Inc., ArmadilloAerospace, UP Aerospace, Microgravity Enterprises and Payload Specialties.

The NewMexico Spaceport Authority currently projects vertical launch activity toincrease in 2009 and construction to also begin in 2009 with the terminal andhangar facility for horizontal launches completed by late 2010.