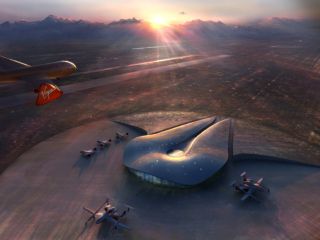 GOLDEN,Colorado -- Architectural and engineering teams have begun shaping the look andfeel of New Mexico?s Spaceport America, taking the wraps off new images today thatshowcase the curb appeal of the sprawling main terminal and hangar at the futuristicfacility.

Last month,a team of U.S. and British architects and designers had been recommended foraward to design the primary terminal and hangar facility at SpaceportAmerica ? structures that symbolize the world?s first purpose-built commercialspaceport.

Selectedfrom an international field of eleven firms, the winning design is the work ofURS Corporation ? a large design and engineering enterprise ? teamed with Foster+ Partners of the United Kingdom, a group with extensive experience in craftingairport buildings.

When the 100,000square-foot (9,290 square-meter) facility is completed -- the centerpiece ofthe world?s first, purpose-built, commercial spaceport -- the structures willserve as the primary operating base for Sir Richard Branson?s VirginGalactic suborbital spaceliner, and also as the headquarters for the NewMexico Spaceport Authority.

The terminal and hangarfacility are projected to cost about $31 million, and will provide a?Destination Experience? for visitors to Spaceport America. Virgin Galacticintends to sign a 20-year lease for approximately 84,000 square feet (7,803square meters) in the building.

?TheURS/Foster team presented us with a concept that blends sensitivity to theenvironment, cutting-edge technology and a stunning image and shape when viewedfrom high above,? noted Kelly O?Donnell, chair of the New Mexico SpaceportAuthority in a press statement last month.

The design chosen is alow-lying, striking bit of construction that uses natural earth as a berm, andrelies on passive energy for heating and cooling, with photovoltaic panels forelectricity and water recycling capabilities. A rolling concrete shell acts asa roof with massive windows opening to a view of the runway and spacecraft.

According to a pressstatement released today, the low-lying, organic shape resembles a rise in thelandscape, and will use local materials and regional construction techniques.

?A careful balance betweenaccessibility and privacy is achieved, as visitors and astronauts enter thebuilding through a deep channel cut in the landscape," the statement noted."The walls will form an exhibition area leading to a galleried level abovethe hangar that houses the spacecraft and on through to the terminal building.Natural light enters via skylights, with a glazed fa?ade reserved for the terminalbuilding, establishing a platform for spectacular views onto the runway.?

Construction on the100,000 square-foot hangar and terminal facility is scheduled to begin in 2008.

Renderings ofthe main terminal and hangar facility were to be unveiled today during a pressconference held at the Pan American Center on the New Mexico State Universitycampus in Las Cruces, New Mexico. Announcements regarding the winning team anddesign selected were held up due to the tragic Mojave, California Air and SpacePort accident on July 26, in which a test stand explosion killed three Scaled employeesduring a routine test.

Company founderof Foster + Partners, Lord Norman Foster, said in an earlier press comment thatthe world?s first space terminal would be a technically complex building. Thefacility not only will provide a dramatic experience for the astronauts andvisitors, ?but will set an ecologically sound model for future spaceportfacilities,? he added.

The NewMexico Spaceport Authority (NMSA) is currently finalizing contract negotiationswith URS and Foster + Partners. The team will then begin working with the NMSAand Virgin Galactic to finalize the design of the facility, and the NMSAexpects to put the construction of the facility out for bids in the first half of2008.

Constructionof Spaceport America would begin in 2008, given a Federal Aviation Administrationissuing of a site operator?s license to the NMSA. Completion is expected inlate 2009 or early 2010.

Year of the spaceship

Founded by Branson,a British entrepreneur and adventurer, Virgin Galactic was created to undertakethe challenge of making private spacetravel available to everyone.

?The designfor Spaceport America is not only breathtaking but also practical which is alsowhat I believe SpaceShipTwo and its launch aircraft WhiteKnight Two will beregarded as when their respective designs are unveiled next January,? Whitehorntold SPACE.com.

Whitehornadded that, with the commencement of construction at Spaceport America and thecompletion of construction of White Knight Two and SpaceShipTwo, he and hisVirgin Galactic team are now confident that 2008 will be ?The Year of theSpaceship.?