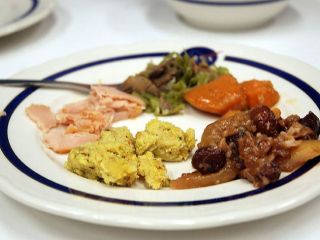 A look at the Thanksgiving dinner of smoked turkey, stuffing, green beans and mushrooms and other treats for the STS-126 crew of shuttle Endeavour on Nov. 27, 2008.
(Image: © collectSPACE.com.)

The U.S.holiday of Thanksgiving may be a longstanding tradition that dates back to 1621on Earth, but it?s a relatively recent phenomenon in void of space.

Today, 10astronauts aboard NASA?s space shuttle Endeavour and the International SpaceStation will gather together in the station?s aptly named Harmony module to celebrateThanksgiving in orbit.

"We'revery fortunate to be up here in space. The only thing that would make it betteris to be with our families," said Endeavour astronaut HeideStefanyshyn-Piper, who will also miss be in space for her husband Glenn'sbirthday tomorrow. "For everyone on Earth, I just hope everyone will haveas nice of a Thanksgiving as we will."

Astronautsaboard the station have been celebrating Turkey Day in space for eightyears and counting, but the U.S. holiday first arrived in orbit in 1973 withthree astronauts flying NASA?s Skylab 4 mission to the American space station.(The crew, astronauts Gerald Carr, William Pogue and Edward Gibson, latercelebrated Christmas aboard the Skylab space station with a makeshift Christmastree made of empty food cans.)

It tookmore than a decade for astronauts to celebrate the holiday in orbit again. Butdetails of that 1989 dinner are shrouded in secrecy since the mission - NASA?sSTS-33 flight aboard Discovery - was a classified spaceflight dedicated to theU.S. Department of Defense.

Americanastronauts celebrated Turkey Days in orbit during shuttle missions in 1991,1996 and 1997 - the last two aboard the shuttle Columbia while it was docked atthe Russian Mir Space Station.

But thelast NASA space shuttle to carry astronauts to orbit over Thanksgiving was - bycoincidence ? also Endeavour, which flew spaceflyers to the International SpaceStation in 2002 during the joint STS-113and Expedition 5 mission and featured a hard-earned dinner after a TurkeyDay spacewalk.

"Blueberry-cherrycobbler, compliments of our guests, and served on a tortilla was a real desserttreat for the Station crew, since that was not included in our meal rotations,?she wrote in a NASA interview. ?Celebrating this holiday in space with somevisiting friends was a very special experience, one that I will remember fondlyin Thanksgivings to come."