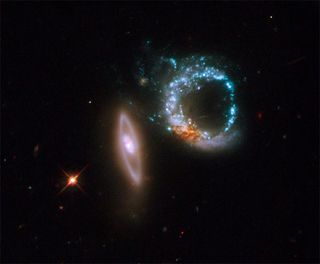 A pair of interacting galaxies called Arp 147 was captured by Hubble's Wide Field Planetary Camera 2. One of the galaxies (left-most galaxy shown) is relatively undisturbed, apart from a smooth ring of starlight. The other galaxy (right-most in image) exhibits a clumpy, blue ring of intense star formation.
(Image: © NASA, ESA and M. Livio (STScI).)

The falloutfrom a major glitch with the Hubble Space Telescope has again delayed NASA?splans to send a space shuttle crew to overhaul the orbital observatory for thefinal time, with launch now set for no earlier than May 2009 due to problemswith a spare part, the agency said late Thursday.

NASA was hoping to launch sevenastronauts to Hubble aboard the shuttle Atlantis on Oct. 14, but delayed themission to February after a serious hardware failure prevented the spacetelescope from relaying the bulk of its images and data to Earth late lastmonth.

But now themission will fly no earlier than sometime next May after problems cropped up witha spare data handling component designed to restore Hubble to full strength.

?Our planis to have it ready to ship to [Kennedy Space Center] in the April-ish timeframeso that it would support a May-ish type launch,? Hubble program manager PrestonBurch of NASA?sGoddard Space Flight Center in Greenbelt, Md., told reporters in ateleconference.

Top NASAofficials said late Thursday that the Hubble delay will not impact plans tolaunch the next two shuttle missions to the International Space Station. Theycleared the shuttle Endeavour for its planned Nov. 14 launch on a space station supply,with the shuttle Discovery slated to launch to the orbiting lab in March 2009.

A vitaldata relay channel, Side A of Hubble?s Science Instrument Control and DataHandling system, failedon Sept. 27, prompting the shuttle mission delay. The failure also sparkeda weeks-long effort by engineers to switch to the backup channel, Side B, forthe first time since Hubble launched in April 1990.

Aftera few hiccups, that troubleshooting effort culminated in the releaseearlier today of Hubble?s first new image since the glitch: a portrait of an oddpair of galaxies called Arp 147.

?I?mvery confident that the Side B system is going to continue to operate as it hasbeen over the last several days,? Burch said. ?Right now, the unit appears tobe very stable.?

Theactivation of Side B allows Hubble to resume beaming home its iconic views ofthe universe, but also leaves the space telescope without another backup if ittoo should fail.

NASAdelayed the launch of Atlantis toward Hubble to allow engineers more time totest a spare data handling system unit on Earth at the Goddard center. But bycoincidence, the Side A channel of that device has also experienced glitches.Efforts to power it up yielded intermittent results.

Engineersare tracing the history of the decades-old spare part, which had been partiallydisassembled over the years and is now being patched back together. It wouldtake at least a full year to build a completely new unit from scratch, missionmanagers said.

?We don?twant to take any chances on bringing a box up there that isn?t going to be 100percent working to the absolute best that it can,? Burch said. ?We don?t wantto leave any stones unturned on the way to the launch pad.?