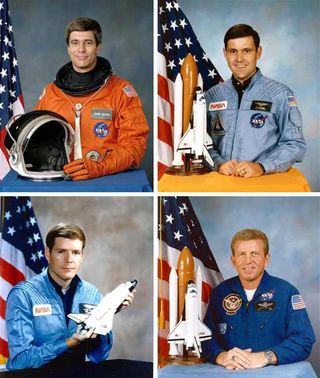 Thecommander of the mission that deployed the Hubble Space Telescope; an astronautwho once set a U.S. men's record for time in space; the first life sciencesmission commander; and the astronaut who led the first assembly mission to theInternational Space Station, are all to be honored this May as the 2008 classof inductees into the U.S. Astronaut Hall of Fame.

The fourspace shuttle pilots: Loren Shriver, John Blaha, Bryan O'Connor and RobertCabana werenamed on Wednesday as the honorees by NASA's Kennedy Space CenterVisitor Complex, which hosts the Hall in Florida. On May 3, the center willhold a ceremony in the 2008 class' honor with many of the 66 Mercury throughshuttle-era veterans who were enshrined in the U.S. Astronaut Hall of Famesince its 1990 opening in attendance.

A committeecomprised of the earlier inductees, current and retired space program workers,historians, authors, educators and journalists voted to select the enshrinees.Astronauts were eligible if they had made their first flight no later than 1991and had been retired for at least five years from the astronaut corps.Candidates were required to be U.S. citizenswho were trained by NASA as either commanders, pilots or mission specialistsand had made at least one orbit around the Earth.

TheAstronaut Scholarship Foundation, which will hosta gala on May 2 celebrating the 2008 class, oversaw the selection ofthe voting committee and induction process. Though typically the classes are limitedto two to three inductees, this year's voting came so close to merit theinclusion of a fourth honoree.

Thecommittee chose the 2008 inductees based on their achievement during theirspaceflights as well as how they contributed to the U.S. space program in other activities.

The 2008class is the seventh group of shuttle astronauts to be named to the Hall since2001.

John Blahabecame an astronaut in 1980 and over the span of 17 years flew on five spaceshuttle missions and one long-duration space station flight.

A U.S. AirForce Aviator and test pilot, Blaha first piloted Discovery on STS-29, thethird flight following the loss of Challenger. His second flight was as pilotof STS-33, only the third shuttle mission to launch at night.

Blahaserved as commander of his third and fourth trips to space. On-board STS-43,his crew deployed the West Tracking and Data Relay Satellite (TDRS) andoperated experiments supporting the development of the extended durationorbiter and space station. STS-58 saw a record 14-day life science researchmission that was recognized by NASA's management as the most successful flightof Spacelab that the space agency flew.

Blahalaunched on his fifth and final mission on STS-79, which docked to the RussianMir Space Station. The third American to live on the outpost, Blaha set thethen-U.S. men's record for time in space during his four months on orbit.

Blaha alsoserved on several NASA panels, including chairing the NASA Flight Safety Panel.He led the design, development and integration of the shuttle's heads-updisplay system and the abort procedures that significantly improved crewsurvivability in the event of multiple main engine failures during launch.

Blaha retiredfrom NASA in 1997 to return to his home town of San Antonio, TX, where he joined the Executive Management Group of theUnited Services Automobile Organization.

Cabanapiloted Discovery on his first flight, STS-41, five years after his selectionas an astronaut. Discovery's crew deployed the Ulysses spacecraft, which isstill in operation around the Sun. Cabana's second turn as pilot, STS-53, wason a Department of Defense mission.

Hecommanded STS-65, during which he and his crew set the then-record for thelongest shuttle mission while conducting experiments inside the second InternationalMicrogravity Laboratory, a model flight for the science operations on the ISS.

Cabana'sfourth and final flight was as commander of STS-88, the first ISS assemblymission. At the helm of Endeavour, Cabana and his crew carried the first U.S. built module, Unity, and mated it with the Russian'sZarya Control Module to form the basis of the station.

Cabana wasDeputy Chief of NASA's Aircraft Operations Division and Chief of the AstronautOffice. He served as Johnson Space Center's Deputy Director for three and ahalf years until October 2007, when he was reassigned to Stennis Space Center as its Director.

BryanO'Connor flew two missions prior to serving as the space agency's chief ofsafety.

O'Connorwas pilot on STS-61B, the second night shuttle launch, deploying foursatellites and testing the assembly of structures in space. He then commandedSTS-40, the first shuttle mission dedicated to life science studies. His crewperformed an vast series of biomedical experiments.

O'Connorleft NASA in 1991 to become commanding officer of the Marine AviationDetachment, Naval Air Test Center, but within a year returned to become the Deputy AssociateAdministrator for Space Flight. He led the redesign of the space station andwas named acting space station program director and space shuttle directorbefore departing NASA again to serve as a consultant.

LorenShriver was selected as an astronaut with the first class of shuttle astronautsin 1978.

Shriverfirst flew as pilot of STS-51C, a classified mission for the Department ofDefense. On his second flight, he led the deployment of the Hubble SpaceTelescope as commander of STS-31, beginning the telescope's nearly 20 years ofimaging the universe.

Prior toaccepting his current position as Vice President of Engineering and IntegrationChief Technology Office at United Space Alliance, he was the company's VP andDeputy Program Manager. Shriver was previously Deputy Director of the Kennedy Space Center from 1997 to 2000.