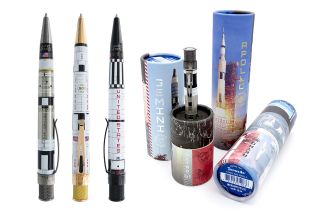 They became iconic by powering some of NASA's most historic missions, and now the rockets that lofted the first astronauts into space and boosted humans to the moon can help launch your next letter, school assignment or office memo.

Retro 51, maker of the Tornado line of collectible rollerball pens, has announced its Space Race Series, a trio of writing instruments that are styled after NASA's early astronaut launch vehicles. The pens, issued in partnership with the Astronaut Scholarship Foundation, are in celebration of next year's 50th anniversary of the first moon landing.

"The Space Race Series puts in the writer's hand miniature tributes to three iconic rockets that helped put the first humans on the moon," Retro 51 writes. "Each pen is made from solid stainless steel and is silkscreened with graphics that evoke the original rockets." [Fisher Space Pen celebrates 50 years in space with Apollo 7 pen set]

The pens are modeled after the Mercury-Redstone, Gemini-Titan II and Saturn V historic boosters.

Alan Shepard, the United States' first astronaut to reach space, rode on top of a Mercury-Redstone rocket on May 5, 1961. Three weeks later, President John F. Kennedy addressed a joint session of Congress, stating in part, "I believe that this nation should commit itself to achieving the goal, before this decade is out, of landing a man on the moon and returning him safely to Earth."

To gain the skills needed to achieve Kennedy's goal, NASA launched the Gemini program. Ten crews of two astronauts each lifted off on Gemini-Titan II rockets to practice and perfect rendezvous, docking and spacewalking ("extravehicular activities"), as well as demonstrate that humans could live and work in space for up to two weeks at a time.

The Apollo-Saturn V rocket, which remains to this day the most powerful launch vehicle successfully flown, lifted off with 10 crews of three people each, including all 24 astronauts who voyaged to the moon and among them, the 12 who landed on the lunar surface, between 1968 and 1972.

On July 16, 1969, Apollo 11 astronauts Neil Armstrong, Buzz Aldrin and Michael Collins launched atop a Saturn V on the historic first mission that landed humans (Armstrong and Aldrin) on the moon.

Each pen in the Space Race Series is individually numbered and limited to a total of 1958, a nod to the 60th anniversary of NASA's founding.

The pens come separately packaged in commemorative gift tubes. The Mercury and Gemini pens retail for $50 each. The Apollo pen is priced at $60.

The pens are also offered as a boxed set with matching serial numbers for $170.

Retro 51 will be donating a portion of the proceeds from each pen to the Astronaut Scholarship Foundation (ASF). Over the course of the past three decades, the Foundation has awarded more than $4.5 million to more than 500 U.S. college students excelling in science, technology, mathematics and engineering degrees.

The Space Race Series pens with the lowest serial numbers have been paired with an Apollo astronaut's autograph and are being sold exclusively by the ASF as part of its "On the Shoulders of Giants" fundraising campaign. Astronauts Charlie Duke (Apollo 16), Jim Lovell (Gemini 7, Gemini 12, Apollo 8, Apollo 13) and Al Worden (Apollo 15) have each signed a print chosen to compliment the pens they accompany.

"Next year marks the 50th anniversary of the historic Apollo 11 mission. Retro 51 is proud to partner with the Astronaut Scholarship Foundation to honor and support the brave men and women who made such an achievement possible and who continue to reach for the stars," the company said.

In September, Retro 51 kicked off its partnership with the ASF by producing an exclusive pen for the "On the Shoulders of Giants" campaign. Retro 51 previously offered three limited edition space-related pens, including one themed to Project Apollo and a "Mission to Mars" model inspired by NASA's Space Launch System (SLS) rocket.

Retro 51's first pen to celebrate space history, the Saturn V inspired-"Lift Off," was voted its most popular pen to date.