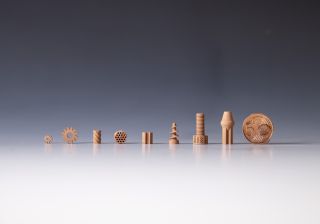 How do you start a colony on the moon? Can you ship everything the colonists need from Earth? That's how NASA handled brief excursions to the lunar surface in the late 1960s and early 1970s, but astronauts couldn't haul that much with them — certainly not enough to sustain themselves over the long term.

Technology has improved since then, but most plans for a sustainable lunar base assume that its residents will use local resources, rather than hauling everything from Earth.

So that's why the European Space Agency (ESA) created a whole bunch of fake moon dust (fake "regolith" in technical terms) and used it to 3D print small screws, gears and even a fake coin. [10 Ways 3D Priniting Will Transform Space Travel]

These printed materials weren't carbon-based plastic or metal, according to a statement from the ESA, but rather a sort of lunar ceramic.

"Ground and sieved down to particle size, the regolith grains are mixed with a light-reacting binding agent, laid down layer-by-layer, then hardened by exposing them to light," according to the statement. "The resulting printed part is then sintered in an oven to bake it solid."

In other words, all these little gadgets had production histories closer to the dinner plate in your cupboard than the screws holding that cupboard together.

This is still an experimental project, so there's a lot more testing to be done — including whether these parts are strong enough to stand up to the stresses of real-world use.

But if this project does work out, the possibilities are exciting. Imagine a door on a future lunar base that's stopped working because the hinge won't close properly. In a world where every replacement part has to be shipped from Earth, the astronauts had better hope they can find the hinge in the spare-parts box — or else that it doesn't really matter whether the door closes in the few months before another hinge can arrive.

But in a regolith-printing world, the solution might be a lot more straightforward. Just ask mission control to send the design along and print it right up.