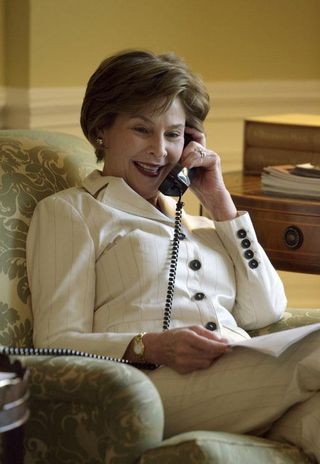 Teacher-turned-astronautBarbara Morgan received a welcome call of support from First Lady Laura BushTuesday, one day before she and six crewmates launch into orbit aboard NASA'sspace shuttle Endeavour.

"Mrs.Bush expressed congratulations from one schoolteacher to another and noted thatshe and the President appreciate Ms. Morgan's commitment to America's spaceprogram, to teaching, and to students," White House officials said of the FirstLady's call in a statement.

During theEndeavour's STS-118 mission, Morgan will oversee the transfer of some 5,000pounds (2,267 kilograms) of cargo between the shuttle and the ISS. She willalso help control Endeavour's robotic arm during orbiter heat shieldinspections and spacewalks to install spare parts and a new starboardpiece of the space station's main truss, mission managers have said.

She alsoplans to hold at least one, and possibly as many as three, interactiveeducational events with schools on Earth via a video link, and is toting millionsof basil seeds and a plant growth chamber to space with her in hopes ofencouraging students to think about how future astronauts will grow food onmissions to the moon and Mars.

Morgan'splanned launch comes 22 years after she was first selected by NASA to serveas the backup Teacher in Space to New Hampshire high school teacher ChristaMcAuliffe in 1985. Then-Vice President George H.W. Bush announced the selectionof McAuliffe and Morgan after a nation-wide search among U.S. educators.

"Beingable to train with Christa and the Challenger crew was such a lucky, wonderfulthing to get to do," Morgan said in a NASA interview. "I learned somuch from them."

But McAuliffe'sspaceflight ended in tragedy on Jan. 28, 1986, when the New Hampshire teacherand six NASA astronauts were killed just after launch when their spaceshuttle Challenger broke apart. Morgan, a former McCall, Idahoschoolteacher, served as NASA's Teacher in Space Designee following theChallenger accident, and later returned to her classroom. She also workedalongside NASA's Education Office and served on the National ScienceFoundation's Federal Task Force for Women and Minorities in Science andEngineering.

"Helpingwith that was a big eye-opener for me," Morgan said, adding that the taskforce highlighted the need to spur students to pursue the science andengineering fields. "Serving on that task force, I think, was one of thehighlights."

In 1998,NASA named Morgan as its first professional Educator Astronaut, a designationthat melds the capabilities of a teacher with the spaceflight training of a missionspecialist. Morgan later trained to serve as a spacecraft communicator, orCAPCOM, to speak with astronauts in orbit, and learned to wield the space shuttle'srobotic arm before receiving her STS-118 assignment in 2002. NASA's 2003Columbia accident also delayed the planned spaceflight.

In herphone call to Morgan this morning, the First Lady noted that "Americans-andlots of excited teachers and students-will be watching the mission with a lotof pride," White House officials said.