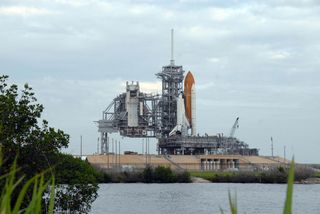 Sandwiched between gray clouds and the Banana Creek can be seen space shuttle Endeavour on Launch Pad 39A surrounded by the Merritt Island National Wildlife Center at NASA's Kennedy Space Center. The shuttle is set to launch Aug. 8, 2007.
(Image: © NASA/Ken Thornsley.)

Theheat wave, which forecasters are calling the "ring of fire," is pushingout typical thunderstorm conditions here at the Kennedy Space Center (KSC),prompting NASA's shuttle weather officer Kathy Winters to raise Endeavour'schance of an on-time launch from 70 percent to 80 percent. Endeavour and itsseven-astronaut crew are set tolaunch Wednesday at 6:36 p.m. (2236 GMT) on a construction flight to theInternational Space Station.

"Thedrier air that we've had in the area is causing us to have less thunderstormactivity, less showers," Winters said in a Tuesday mission status briefing."The same thing that's causing the hot temperatures is the same thingthat's allowing us to have good weather for launch."

Meanwhile,shuttle technicians finished the delicate procedure of loading the propellantto feed Endeavour's fuel cells early this morning, which will provide on-boardpower for the spacecraft.

Asthe weather system pushes away the chance of thunderstorms on launch day,astronauts continue preparing for their expected liftoff.

Teacher-turned-astronautBarbara Morgan, an STS-118 mission specialist, is set make her firstjourney into space Wednesday as a member of Endeavour's crew. Her flight hasbeen 22 years in the waiting, as Morgan was Christa McAuliffe's backup duringNASA's Teacher in Space program, which ended shortly after the 1986Challenger tragedy.