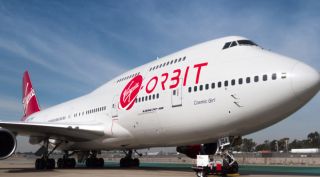 Virgin Orbit's LauncherOne rockets will be air-launched from a 747-400 carrier.
(Image: © Virgin Orbit)

WASHINGTON — Commercial space vehicles designed to fly satellites into orbit could be used by the military one day to move cargo around the world.

"It's certainly in the cards and available to the military to develop over the next decade," said Dan Hart, CEO of Virgin Orbit in Long Beach, California — a spinoff of suborbital spaceflight company Virgin Galactic.

The company has hosted a number of Air Force leaders at its factory, including the commander of Air Mobility Command Air Force Gen. Carlton Everhart. [Now Boarding: The Top 10 Private Spaceships]

Everhart mentioned his recent visits to Virgin Orbit and SpaceX during a defense writers breakfast on Thursday, where he voiced enthusiasm about the possibilities of applying commercial space technology to military logistics.

As the head of Air Force transportation, Everhart is especially interested in the idea of moving supplies using space vehicles, and how that could transform military logistics. "He was on our factory floor, he was incredibly engaged with engineers and technicians. The conversation was bouncing back and forth and you could see the energy," Hart told SpaceNews. "We had a similar experience with Air Force Secretary Heather Wilson and other leaders."

Point to point travel using suborbital flight has been talked about for years, Hart said. "There's no barrier to that." If the military wanted to transport cargo across the globe, the technology is available to do that, but a lot of planning and engineering would be required.

"We do have technology in launch, re-entry systems and landers that show we can transport high value cargo and land it safely," said Hart. A container coming from space could reenter the atmosphere using parachutes or gliding, like the military X-37 spaceplane does. "Some of those details would have to be worked out," Hart said.

Space launch providers today are focused on putting up military and commercial payloads into space. The transportation of military cargo falls into the category of efforts that are further into the future. Launch would be the easy part. Other areas, like re-entry and recovery, would require the government to invest more time and money if it wants to transport cargo across the planet.

If a viable plan is developed, the potential benefits are significant, Hart said. "It would be urgency of delivery, if you needed a critical part, medical device or donor organ delivered across the globe in 90 minutes or even quicker."

If the military is serious about this, it will have to focus on mission design. "There's a fair amount of advanced engineering they would have to do," Hart said. He compared space-based cargo transportation to intercepting enemy ballistic missiles. "You'd have to operate much the way missile defense systems operate today. You don't have a clear idea of where you're going to go but you've done a lot of upfront engineering so you have trajectories that are pre-planned that can get you there."

A typical space mission takes weeks or months to plan and conduct design reviews. "That is usually how space launch works," Hart said. But if a system were engineered like missile defense, "a threat can pop up anywhere and the system automatically knows how to fly to it," he said. "You'd have to do some development to automate the flight design. That is an engineering, not a technology problem."

There is nothing particularly new about moving cargo in and out of space. "We have done a lot of that work as a country," said Hart. "A lot of work has been done on thermal insulation, on trajectories, on how to fly from space to Earth."

Another option for the military would be to "preposition" cargo at spaceports for fast crisis response. "The easiest way would be to have it packaged within fairings. Then all you need to do is connect the fairing on to the rocket and go."

Expectations of a growing military business is why Virgin Orbit created a subsidiary called Vox Space to focus on the government market. The company's LauncherOne first military mission is scheduled in 2019 — the DoD Space Test Program overseen by the Air Force Space and Missile System Center.