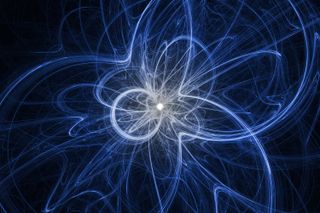 An artist's rendition of subatomic particle movement. Neutrino physicists examined neutrinos detected by the IceCube Observatory, and found that they adhere to Albert Einstein's theory of relativity.
(Image: © Shutterstock)

Once again, scientists have shown that Albert Einstein's theory of special relativity is right — this time, thanks to a particle detector buried deep beneath Antarctica.

Scientists from the 1-gigaton IceCube Neutrino Observatory examined subatomic particles called neutrinos: elusive, chargeless subatomic particles that are as small as electrons. The researchers wondered if these tiny, high-energy particles would deviate from the behavior predicted by the theory of special relativity. Specifically, they were testing Lorentz symmetry — the principle that the laws of physics are the same, whether you're an astronaut zooming through space at a million miles an hour or a snail inching along on Earth at a tiny fraction of that speed. [8 Ways You Can See Einstein's Theory of Relativity in Real Life]

Neutrinos are everywhere, but travel solo throughout the universe, rarely interacting with other matter. As neutrinos fly through space, they oscillate between the three different states, which physicists call flavors: electron, muon and tau. When neutrinos interact with the ice beneath the observatory they morph into muons, which are charged and can then be identified by the detector.

If the principle of Lorentz symmetry holds, a neutrino of a given mass should oscillate at a predictable rate — meaning a neutrino should travel a certain distance before transforming into a muon. Any deviation in that rate could be a sign that our universe doesn't work the way Einstein predicted.

This means neutrinos are "sensitive probes for looking at space-time effects," such as Lorentz violation, said lead author Carlos Argüelles, a particle physicist at the Massachusetts Institute of Technology (MIT).

"Theories can break down, or they can have new effects when you're looking in new territories," Argüelles told Live Science.

Scientists have searched for evidence of Lorentz violation in numerous instances, from photons to gravity, but have always come up empty-handed. But with neutrinos, Argüelles said, scientists can "explore this new high-energy regime that was previously unexplored."

Argüelles and his colleagues reviewed two years' worth of neutrino data collected by the IceCube Observatory. Their search yielded no evidence of Lorentz violation in the realm of high-energy neutrinos. "This closes the book on the possibility of Lorentz violation for a range of high-energy neutrinos, for a very long time," study co-author Janet Conrad, a physicist at MIT, said in a statement. [Einstein Quiz: Test Your Knowledge on the Physics Genius]

This outcome allowed the researchers to calculate that anything that interreacts with neutrinos at an energy level greater than 10 raised to the minus 36 gigaelectron volts (GeV) squared, seems to obey the normal rules for neutrino oscillations — meaning that Lorentz symmetry still works as expected. To put that in perspective, infinitesimally small neutrinos interact with matter at an energy level of about 10 raised to the minus 5 GeV squared, which is still incredibly weak but is 10 nonillion times bigger than this new limit.

"We were able to set the most stringent limit yet on how strongly neutrinos may be affected by a Lorentz-violating field," said Conrad.

Neutrinos had not yet been discovered when Einstein died, but his theory still predicts their behavior, "which is amazing," said Argüelles. "So far, we have found no evidence that there is a problem with Einstein's theory of space-time relativity," he said.

Nonetheless, Argüelles and his colleagues plan to continue exploring higher-energy phenomena for instances of Lorentz violation. "As you explore new conditions, you may find things that were not important are now important," he said.

The team published their results today (July 16) in the journal Nature Physics.