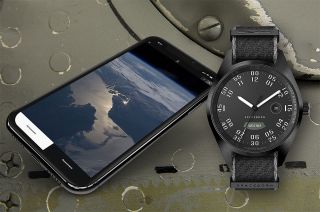 A watchmaker that saw success crafting timepieces from rocket-flown metal is now looking to connect outer space to your wrist.

In 2017, Werenbach crowdfunded more than $785,000 for its first line of watches, which were made out of spent Russian Soyuz rocket stages used to launch astronauts and cosmonauts to the International Space Station. On Tuesday (June 12), the Zurich-based company returned to Kickstarter for its next merger of space and time.

"It started with a wild dream: to build a watch from a real space rocket. Now we set out with an even bigger dream to achieve," Zurich-based Werenbach wrote on the crowdfunding website. "After one of the most successful watch stories in Kickstarter history, we wanted to return to you, our supporters, with something new once again — a watch with a real piece of rocket at its heart that now also connects you to space to share the view of an astronaut in real time," the watchmaker announced. [Space Gifts 2018: These Father's Day Gifts Are Out of This World]

Werenbach's original Earth collection and its subsequently-released Leonov series featured watch dials cut from salvaged rocket parts. Its Soyuz collection added the option of the watch's case being made from a melted-down rocket engine.

Werenbach's new Mach 33 collection includes flown booster metal "at the heart" of the watch, in the form of a plate on the dial.

"We incorporate real space rocket material into each of our watches, otherwise, it wouldn't be a Werenbach," the company said. "The material comes from a Soyuz rocket (MS-02) that transported three astronauts to the International Space Station and was recovered by hand in the Kazakh steppe."

Werenbach's Sport and Classic Mach 33 models feature gray and silver fragments of the rocket cut from the outer shell. A "Gravity" model, limited to 999 pieces, has orange material from the rocket's engine cladding.

"Gravity is a limited edition due to the limited amount of orange material [found] on the rocket," wrote Werenbach.

Whereas Werenbach's earlier watches put a piece of the space program on your wrist, the new Mach 33 collection also connects your wrist to space.

"With one touch of your watch to your phone, you can actually be patched in live to the International Space Station's real-time video of Earth — the same view as the astronauts aboard," explains Werenbach.

The link to orbit is made possible by an embedded authentication chip inside the watch and several HD video cameras mounted outside of the International Space Station. Activated in 2014, the High Definition Earth Viewing (HDEV) experiment offers a live stream from about 250 miles (400 kilometers) above the planet.

Astronauts have said seeing Earth from space is a transformative experience.

"The so-called ''overview effect'' makes the beholder realize how small and fragile Earth is and how relative everything can be," Werenbach described. "This is a new digital experience designed to inspire watch wearers in their everyday lives and to encourage them to think in a completely new way."

Touching the timepiece to a smartphone also loads information authenticating the flown plate on the watch's dial. (To access all the Mach 33 features, Apple iPhone owners need to download the Werenbach app. Android phones already have the chip-reading technology enabled.)

Werenbach designed its Mach 33 collection to fly off the (proverbial) shelves.

"The name itself, Mach 33, refers to the speed required to overcome gravity itself," the company wrote.

Werenbach's other rocket-metal timepieces sell for at least $1,200 and can go for as much as $8,000 depending on the model. The new Mach 33 watches begin at $212 (discounted from the full retail price of $365 while on Kickstarter).

The highest priced Mach 33 watch offered as part of the crowdfunding campaign, the limited edition Gravity model, is about $283 (CHF 279).

"Not from this world, but at our fans' request, with a very down to Earth price. That was the core idea for this collection," wrote Werenbach.

Werenbach is seeking to raise $40,500 (CHF 40,000) with its Mach 33 campaign. Watches backed through Kickstarter through July are slated to be ready to ship by early December.