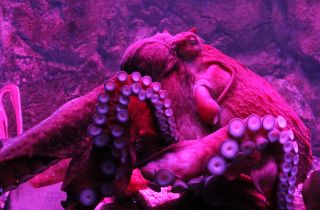 Scientists are dubious of a new paper that suggests frozen octopi eggs rode a meteor to Earth 540 million years ago.
(Image: © Shutterstock)

I want to believe the conclusions of a new paper that says octopuses are actually space aliens whose frozen eggs first came to Earth aboard an icy meteor. I want to believe that humans, too, are aliens — the final descendants of an extraterrestrial virus that crashed to Earth 540 million years ago and sent evolution spiraling into wild new directions. I want to believe that the universe is one giant biosphere, tossing the same building blocks of life from planet to planet in a never-ending game of cosmic hot potato.

I want to believe these things because they are cool and fascinating — but I probably shouldn't. Because right now, there is still almost no evidence for any of this. And researchers not involved with this study have serious reservations about its conclusion. [7 Theories on the Origin of Life]

Still, that did not stop a team of 33 authors from publishing a recent peer-reviewed paper that hypothesized all of these things and more. The paper, published March 13 in the journal Progress in Biophysics and Molecular Biology, had a simple if unusual thesis: The Cambrian explosion — that sudden burst of biodiversity during which most modern animal groups first appeared in the fossil record some 540 million years ago — was the direct result of an extraterrestrial virus that crashed to Earth in a meteor impact.

The new paper revives a controversial theory on the origins of life known as the panspermia hypothesis. First proposed by one of the present study's authors and a colleague in the 1970s, this hypothesis suggests that biological life as we know it did not evolve independently on Earth, but was rather "seeded" from life-bearing comets that pummeled our planet at various times throughout history.

These comets could have introduced Earth to novel life-forms that evolved on other planets, including viruses, durable microorganisms like unearthly tardigrades or, as the new study suggests, even fertilized animal eggs from other worlds.

The octopus in the room

For evidence of the panspermia hypothesis, the authors wrote in their new paper, skeptics need only look to the octopus.

Octopuses have complex nervous systems, camera-like eyes and a capacity for camouflage that evolved suddenly and without precedent in their family tree, according to the study authors. The genes for these adaptations, the authors wrote, do not seem to have come from octopus ancestors, but "it is plausible then to suggest [these traits] seem to be borrowed from a far distant 'future' in terms of terrestrial evolution, or more realistically from the cosmos at large."

In one theory laid out in the paper, the authors posit that fertilized octopus eggs crashed into the sea aboard an icy comet at the onset of the Cambrian explosion. Another explanation, they propose, could be that an extraterrestrial virus infected a population of early squid, causing them to evolve rapidly into octopuses as we know them today. [Cambrian Creatures Gallery: Photos of Primitive Sea Life]

Other researchers were not quick to embrace this theory. "There's no question, early biology is fascinating — but I think this, if anything, is counterproductive," Ken Stedman, a virologist and professor of biology at Portland State University, told Live Science. "Many of the claims in this paper are beyond speculative, and not even really looking at the literature."

For example, Stedman said, the octopus genome was mapped in 2015. While it indeed contained many surprises, one relevant finding was that octopus nervous system genes split from the squid's only around 135 million years ago — long after the Cambrian explosion.

Stedman added that, for a virus, such as the RNA-based ones known as retroviruses, to somehow turn a squid into an octopus, that virus would have to evolve on a world where squid were already plentiful.

Modern retroviruses have evolved to be extremely specific about which hosts they infect, Stedman said. But a retrovirus from outer space wouldn't have evolved to be specific for Earth-based creatures, and "certainly not specific enough for something like a squid — unless you have massive amounts of squids on some planet incredibly close to us that is spitting off all of these meteors. But I think that kind of assumption is highly unlikely," Stedman said.

Karin Mölling, a virologist at the Max Planck Institute for Molecular Genetics in Germany, echoed this sentiment in a piece of commentary published alongside the new paper.

While the new study is "very useful" for thinking about the influence of the universe on our planet in new ways, the findings "cannot be taken seriously," Mölling wrote. "There is no evidence for it at all."