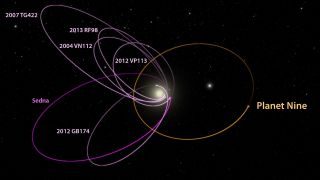 The solar system just got a bit stranger. As astronomers continue their ongoing quest to find the elusive Planet Nine, a team found a space rock that lends credence to the idea that a huge super-Earth planet really exists in the outer reaches of our solar system.

The newfound asteroid, called 2015 BP519, adds to a growing body of evidence about little worlds in the solar system being perturbed by something big. Astronomers detailed its discovery and description in a new paper, adding that the bizarre angle of its orbit gives more weight to the idea that a big planet is out there — somewhere — tugging on the asteroid's path around the sun.

"We also consider the long term orbital stability and evolutionary behavior within the context of the Planet Nine hypothesis, and find that 2015 BP519 adds to the circumstantial evidence for the existence of this proposed new member of the solar system," read the abstract of the paper, which is available now on preprint website Arxiv and has been submitted to The Astronomical Journal. [How Astronomers Could Actually See 'Planet Nine']

Following up on the discovery, Quanta Magazine recently published an article surveying several astrophysicists who specialize in studying small worlds, including the discoverers of 2015 BP519. While not everybody agreed that Planet Nine was responsible for the strange orbit, the overwhelming majority agreed the new discovery gives more credence to the idea. "The second you put Planet Nine in the simulations, not only can you form objects like this object, but you absolutely do," lead author Juliette Becker, a graduate student at the University of Michigan, told Quanta. (You can look at the object's orbit online here.)

It's not the first time Planet Nine was blamed for pushing an object around. Back in 2014, before Planet Nine was officially hypothesized, astronomers Scott Sheppard and Chadwick Trujillo noticed orbital irregularities in several small bodies beyond Neptune's orbit. These included dwarf planet Sedna, a newfound object called 2012 VP113, and several other trans-Neptunian objects (TNOs).

Then, in January 2016, astronomers Konstantin Batygin and Mike Brown saw more evidence of TNOs with perturbed orbits. They were the ones who first gave "Planet Nine" a name, size and distance. They suggested that the mysterious planet could be 10 times more massive than Earth, located 600 astronomical units (AU) from the sun. (One AU is the average distance between the Earth and the sun, which is 93 million miles or 150 million kilometers.)

A flood of studies followed about TNOs and how Planet Nine might have affected their orbits; the following summary is just a sampling. Not all teams were enthusiastic, with one group from the Outer Solar System Origins Survey (OSSOS) cautioning that many of these surveys could be just observational bias.

But astronomers persisted, with Sheppard and Trujillo discovering at least two new TNOs possibly affected by Planet Nine. Another study showed Planet Nine perhaps influenced the tilt of planets in our solar system. And in 2017, astronomers from the University of Madrid in Spain found peculiarities in the orbits of 22 "extreme" TNOs that orbit the sun that could also be explained by a large, distant body exerting gravitational influence. (These TNOs never get closer to the sun than Neptune — which is 30 AU away, orbiting the sun in a rough circle — and have an average distance of at least 150 AU.)

By October 2017, Batygin said, there were at least five different lines of evidence that suggest the existence of the planet. "If you were to remove this explanation and imagine Planet Nine does not exist, then you generate more problems than you solve. All of a sudden, you have five different puzzles, and you must come up with five different theories to explain them," he said in a statement.