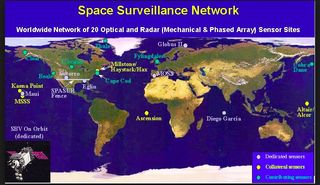 WASHINGTON — A new policy said to be on President Trump's desk for final approval would designate the Department of Commerce as the public face of space traffic management.

The job of policing space currently is performed by the Department of Defense. It involves answering queries from private citizens, corporations and foreign governments about the position of satellites on orbit, and warning agencies and commercial satellite operators of potential orbital collisions.

For the past several years the Pentagon had prepared to turn these responsibilities over to the Federal Aviation Administration but the Trump administration decided Commerce was a better fit  in light of the booming private space economy.

Although there is overall agreement on the transfer of responsibilities, the specifics of who will do what may take years to sort out. DoD has deep expertise in "space situational awareness," or SSA, whereas Commerce faces a steep learning curve.

DoD holds the SSA authority and public service responsibility under section 2274 of Title 10 of the U.S. Code

In advance of the president signing off on the new policy, the House Armed Services Committee is weighing in. The chairman's mark of the Fiscal Year 2019 National Defense Authorization Act unveiled on Monday (May 7) includes language that lays a path for the implementation.

Section 1603 of the HASC chairman's bill — titled "Space Situational Awareness Services and Information" — would amend section 2274 by "terminating the authority of the Department of Defense to provide space situational awareness data to commercial and foreign entities on January 1, 2024."

Doug Loverro, former deputy assistant secretary of defense for space policy during the Obama administration, said this language "suggests that Congress is looking for a smooth transition without a break in service." This provision is not inconsistent with the administration's plan to move SSA services to Commerce, Loverro told SpaceNews. "The good news is that several years ago this same committee was clearly against DoD ever losing control of this vital function. So I would say that this represents true progress in moving this inherently civil function to a civil agency."

The decision to assign space traffic management to the Commerce Department was revealed by Vice President Mike Pence last month at the Space Symposium in Colorado Springs. He said Commerce will be instructed to "provide a basic level of space situational awareness for public and private use, based on the space catalog compiled by the Department of Defense, so that our military leaders can focus on protecting and defending our national security assets in space."

The space catalog is maintained by the Joint Space Operations Center at Vandenberg Air Force Base, which is part of U.S. Strategic Command. The center operates the Space Surveillance Network, a worldwide system of ground-based radars along with ground-based and orbital telescopes.

Deputy Assistant Secretary of Defense for Space Policy Stephen Kitay said the White House directive is an "important step forward in light the increased commercial activity in space and the need for DoD to focus on its war fighting missions."

Kitay cautioned he did not want to get ahead of the White House and would not discuss specifics of the transition. He noted that SSA is a complex mission. There are 1,500 active satellites on orbit today. DoD monitors about 20,000 objects in space that are 10 cm or larger. Plus there are hundreds of thousands of objects that are smaller.

The clutter could soon reach alarming proportions. "You've seen the business plans coming forward. If they come to fruition, people are discussing constellations of thousands of satellites. These objects are moving at thousands of miles per hour. Some of these small satellites may not have active propulsion on them," said Kitay. "How do we think about the long term safety, sustainability of this domain so we can all benefit from it? This is an area that is going to require a lot of attention."

The Pentagon will remain closely involved in this mission, even with Commerce as the public face of SSA, Kitay said. "Our partnership with Commerce is not going to be us saying, 'Commerce, this is now yours, and SSA is your problem.' SSA is a critical mission for us, and we will continue to maintain those resources and sensors."

A number of details will have to be worked out over time, Kitay noted, including the role of the private sector in SSA.

"A lot is happening out there with companies," he said. "We want to make sure we take advantage of advances in commercial technology."

Private space surveillance companies are enthused by the transition of SSA to Commerce, said Travis Langster, vice president of business development at AGI Inc., a provider of space data and analytical tools. Companies in this sector for years have been frustrated by DoD's resistance to opening up the market to the private sector.

"Moving to Commerce is a good thing," Langster said in an interview. "The FAA took it as far as they could." Commerce has said it wants to promote innovation, he said. "That is a big mantra for companies like us that provide commercial SSA services."

DoD today offers a "basic level of service, which needs to be enhanced," said Langster. "The space traffic management is not adequate for commercial use." The industry would like to see this policy executed in a way that advances, not stifles, the progress of technology, Langster said. "The current model pits the commercial SSA marketplace against the DoD, and does not allow the commercial SSA market to fully form."

The DoD catalog is "critical for national security," said Langster. "But there is an opportunity to enhance that catalog with other types of information."

DoD and Commerce will have different SSA priorities, said John Monahan, senior vice president of Kratos Defense. The company provides radio-frequency monitoring services for military SSA. "DoD is going to have to continue being involved in space traffic management," he said. "Commerce is going to have to have an SSA tool but they will not completely own the SSA mission. SSA is too critical and too deeply integrated. It's a warfighting mission. Both organizations are going to need it, but each has different needs."

When Commerce takes over SSA duties, there will be much greater appetite for use of commercial sensors, said Greg Caicedo, Kratos' vice president of data and network solutions. The population of data and analysis vendors is starting to expand in the United States and internationally, he said. And many countries increasingly worry about how they will be able to detect nefarious acts in space. "What is the intent? How do we tell commercial activity from aggression?" Those are some of the questions being asked, said Caicedo. "By having a civilian agency take over space traffic management we can have greater international cooperation and transparent communications."

Loverro recalled that the debate over space traffic management started to pick up steam about five years ago. "The plan had been to go ahead and eventually transfer the responsibility to the FAA." Pilot programs were kicked off to figure out a transition. But at one point the FAA decided it didn't want this job and Trump's Commerce Secretary Wilbur Ross thought it made sense for his agency to take it.

There are still questions on who will perform specific duties such as operating sensors, Loverro noted. When there are two satellites coming close to each other, somebody has to "task" a sensor to go take measurements and calculate distances between objects. "That kind of back and forth between the calculations and the tasking has to happen," he said. "How that's mechanized we don't know yet. Commerce will have access to the data but will they be able to task DoD sensors around the world, or will they hire commercial firms that have sensors?"

Loverro said Commerce could outsource these duties, as companies do this type of work routinely. "Whether or not that's the direction Commerce will go remains to be seen."

Earl Comstock, director of the Commerce Department's Office of Policy and Strategic Planning, said DoD has "done a fantastic job providing a public service tracking objects in space." Now there are more actors, and they would like to have a civilian agency to undertake that responsibility, he said at a recent Hudson Institute conference on space policy.

"They'll continue to be involved," Comstock said of DoD. "They have the resources to track these capabilities. But the public face of this should be a civilian agency." The National Space Council will work on many of the transition details, said Comstock. The challenge: "How do we maintain the DoD's resources but relieve them of the burden of having to interface so much with the public?"

The reality is that Commerce or any other civilian department the White House might pick doesn't have the resources to do SSA, said Comstock. "DoD will continue to do that, but Commerce believes it should interface with the public and the industry as a means of attracting people to the United States as a place to come and do business," he said. "We also want to set a standard for the rest of the world … and unite the club of 'responsible actors.'"