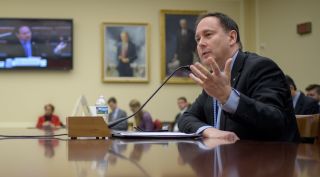 WASHINGTON — Robert Lightfoot, who has led NASA on an interim basis for more than a year, announced March 12 that he will retire from the agency at the end of April, adding more uncertainty about the agency's leadership.

"It is with bittersweet feelings that I am announcing I will be retiring from the agency on April 30, 2018," Lightfoot said in a memo to agency staff. "I will work with the White House on a smooth transition to the new administrator." Lightfoot didn't discuss why he decided to retire in the memo.

Lightfoot has been acting administrator since the beginning of the Trump administration in January 2017, a period of nearly 14 months. That tenure has shattered the record for the longest time the agency, which turns 60 years old later this year, has been led by an acting administrator. [From Ike to Trump: Presidential Visions for Space Exploration]

The White House nominated Rep. Jim Bridenstine (R-Okla.) to be administrator in September 2017 and resubmitted the nomination in January. In both cases Bridenstine's nomination has been advanced by the Senate Commerce Committee on a strict party-line vote, but the full Senate has yet to take action to confirm Bridenstine.

There is a widespread belief in the space industry that the Senate has not acted on Bridenstine's nomination because he lacks the votes to win confirmation. All 49 Democrats in the Senate are opposed to Bridenstine, as well as reportedly Rep. Marco Rubio (R-Fla.) With Sen. John McCain (R-Ariz.) still absent from the Senate because of cancer treatments, Bridenstine lacks the 50 votes needed to be confirmed.

Members of the House Science Committee criticized the Senate for not taking action on Bridenstine's nomination during a March 7 hearing on NASA's fiscal year 2019 budget proposal attended by Lightfoot.

"In the environment we work in, the resources that the agency needs in the long term, having a director nominated and confirmed by the United States Senate from the administration is critically important," said Rep. Frank Lucas (R-Okla.)

Lightfoot said at that hearing he did not have problems getting access to the White House when needed, but that there was value in having a permanent administrator in place. "It is always of value to have the person the president wants in this position," he said. "That would be important for us all from that standpoint." He gave no indication at the hearing of any plans to retire.

"I cannot express enough my gratitude to the entire NASA team for the support during my career and especially the last 14 months as your acting administrator," Lightfoot said in his retirement memo. "The grit and determination you all demonstrate every day in achieving our missions of discovery and exploration are simply awe inspiring."

Lightfoot's departure adds to a leadership void in the agency. In addition to the stalled Bridenstine nomination, the White House has not nominated a deputy administrator for the agency. The nomination of Jeffrey DeWit to be NASA chief financial officer, announced in November, is pending confirmation by the full Senate.