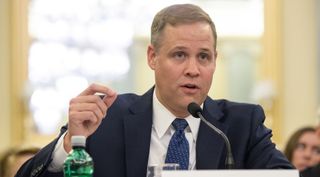 WASHINGTON — The Senate Commerce Committee voted strictly upon party lines Nov. 8 to send the nomination of Jim Bridenstine as NASA administrator to the full Senate for confirmation.

The committee, during an executive session where it approved several other nominations and legislation not related to NASA, voted 14–13 to favorably report Bridenstine's nomination. All 14 Republicans on the committee voted in favor of the nomination, and all 13 Democrats voted against it in a roll call vote.

Sen. Bill Nelson (D-Fla.), the ranking member of the committee, expressed his opposition to the nomination in brief remarks at the start of the session. The position of NASA administrator, he said, should be a nonpartisan position filled by someone who is a "skilled executive" with the ability to manage technical programs.

"I believe, Mr. Chairman, that the nominee falls short" in those key areas, Nelson said.

The party-line vote was not surprising after a confirmation hearing Nov. 1 where Bridenstine, a Republican congressman from Oklahoma, faced criticism from Democratic members on issues ranging from climate change to womens and LGBTQ rights to past campaigning by Bridenstine against Republican members of the Senate. Republican members, though, expressed their support for his nomination throughout the hearing.

That hearing stood in contrast to past confirmation hearings for NASA administrators, which have been far less partisan. "Last week we had a hearing on the NASA nominee that was, shall we say, a rather robust hearing," Nelson said. "It was much more contentious than any case, historically, for a NASA administrator."

It's not clear when the full Senate will take up Bridenstine's nomination. In an interview after the Nov. 1 confirmation hearing, committee chairman Sen. John Thune (R-S.D.) said that the timing would depend on the status of other legislation being considered by the Senate as well as whether Democratic members take steps to slow its consideration.

"I think in the end the votes will be there, so it's just a question of how long they want to drag it out," he said.

Nelson, in his opening remarks, repeated some of comments Rubio previously made about Bridenstine's nomination. Rubio, in those comments, said it could be "devastating for the space program" for partisan politics to be a factor in the selection of an administrator.

Nelson added that he sought Rubio's permission to repeat those quotes at the markup. "I went to Marco and asked him if he minded that I quoted this quote that was in the newspaper, and he said, 'Please do,'" Nelson said.