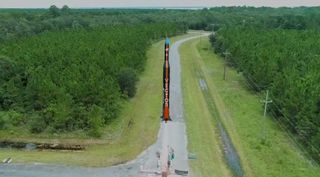 The second Vector-R rocket lifts off on a low-altitude test flight from a site in Camden County, Georgia, Aug. 3.
(Image: © Vector)

TORONTO — Vector, one of a growing number of companies developing small launch vehicles, plans to carry out its first orbital launch this summer from Alaska.

The Tucson, Arizona-based company announced its launch plans in a Feb. 14 press release announcing that a customer had placed a reservation of five launches of the company's Vector-R small launch vehicle. The statement said only the company's first orbital launch was planned for July. A company spokesperson told SpaceNews said the launch location and any customers for that mission were still to be determined.

However, in a talk Feb. 15 at the Canadian SmallSat Symposium here, Jim Cantrell, co-founder and chief executive of Vector, disclosed that the inaugural Vector-R orbital launch would take place from "Kodiak," a reference to the Pacific Spaceport Complex-Alaska, formerly known as the Kodiak Launch Complex on Alaska's Kodiak Island.

"We're working on getting a flight ready for quarter three. Officially we're saying July," he said. That date, he said, was pending receiving a launch license from the Federal Aviation Administration, a process he said has been ongoing for two years. "It's all success-oriented schedules, so things could slip. But we're not talking about 2019: we're really going to launch this year to orbit."

That launch will carry payloads for undisclosed customers. "Our first launch is from Kodiak," he said. "It will have a small payload and we'll have a test payload on it as well."

A flight from Alaska represents a change in plans from what the company announced just a few months earlier. On Oct. 19 the company said it had an agreement with the Virginia Commercial Space Flight Authority to perform its three launches from the Mid-Atlantic Regional Spaceport at Wallops Island over the next two years. At that time Cantrell said the first orbital flights would take place from Wallops.

Vector has kept its options open regarding launch sites. The company's previous test launch, a very low altitude test flight in August, flew from the future site of Spaceport Camden in Camden County, Georgia, on the Atlantic coast. Local officials are currently working to obtain a spaceport license from the FAA for the planned facility.

Cantrell said the company was also considering launch sites outside the United States, despite the regulatory challenges involved. That includes, he said, potential sites in Canada. "We're actively talking with our Canadian friends," he said. "We think to be truly dominating the market, we have to branch out into international channels. Canada would be a really great place."

Vector is currently building rockets in a facility it is leasing in Tucson, but Cantrell said the company expects to break ground this summer on a 100,000-square-foot factory in the city adjacent to the headquarters of World View, the stratospheric balloon company. "We're really, truly trying to ramp up our production," he said. "What I think will differentiate us from everybody else is our ability to scale up our ability to design, manufacture and fly."

Terms of the agreement were not disclosed, although Vector offers the Vector-R rocket, capable of placing 65 kilograms into orbit, for $1.5 million. Jordà-Siquier said in an interview at the conference that the launch reservations announced in the statement will be converted at later dates into full-fledged launch contracts for missions between 2019 and 2023.