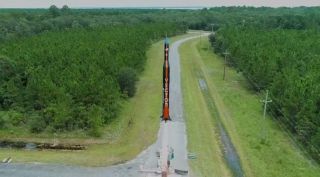 The second Vector-R rocket lifts off on a low-altitude test flight from a site in Camden County, Georgia, Aug 3.
(Image: © Vector)

WASHINGTON — Vector, a company developing the Vector-R small launch vehicle, carried out what it said was a second successful low-altitude test flight of the rocket from a Georgia site Aug. 3.

The Vector-R rocket lifted off from future site of Spaceport Camden in Camden County, Georgia, near the Atlantic coast, at about 12:25 p.m. Eastern. The launch, designated B.002 by the company, is the second in a series of several test flights planned for the Vector-R.

The company did not immediately release details about the flight, but declared the launch a success in social media posts immediately after the brief flight.

"In summary, the rocket took off, it flew, so we're happy about that," said John Garvey, chief technology officer of Vector, in an video released by the company a little more than an hour after the flight.

A launch attempt about 40 minutes earlier was aborted because of a problem with the ignition system for the rocket's single engine. "We had some ignition problems that we had to work our way through," Garvey said. Technicians made adjustments at the pad that corrected the problem, he said.

The launch was the second for the Vector-R, after a test flight three months earlier in California's Mojave Desert. Both launches were low-altitude test flights, with a peak altitude on this flight of no more than 3,000 meters. That is part of an incremental test strategy by the company.

"It's an incremental development approach that gradually adds more and more complexity and performance to the vehicle as we go along," James Cantrell, chief executive of Vector, said in an interview after the May test flight. Vector is planning a total of up to six test flights, culminating in an orbital launch, he said then.

Vector announced June 29 that it had raised a $21 million Series A funding round led by Sequoia Capital, a venture capital firm based in Silicon Valley. That funding round, the company said at the time, would allow it to accelerate its testing program.

Garvey didn't give a schedule for the next test flight, which will test a thrust vector control system for the rocket. "We'll be regrouping in the next few days and looking at that schedule," he said, adding there is an engine test planned at the company's headquarters in Tucson, Arizona, on Aug. 11.

The launch was also the first from the future site of Spaceport Camden, a proposed commercial launch site near the Atlantic coast in southern Georgia. Camden County officials have been working on plans to develop a vertical launch site on property that once hosted a Union Carbide facility, and is in the process of obtaining a launch site operator's license from the Federal Aviation Administration.

The site, though, lacks dedicated launch facilities or other critical infrastructure; Vector noted it needed a satellite internet link in order to provide a webcast of the launch. At one point in the webcast, a wild pig could be seen crossing the field in front of the launch pad as workers corrected the igniter problem with the rocket.

The forests surrounding the pad also posed a challenge for recovering the rocket, which descended back to Earth under a parachute. "This is a new experience for us," said Garvey, who has extensive experience launching and recovering rockets in the Mojave Desert. "It took about 45 minutes to find it. A little different than the desert."