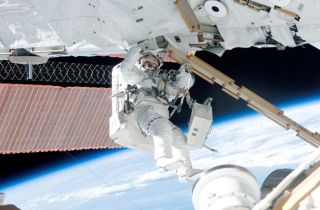 Astronauts Steven Swanson and Patrick Forrester (out of frame), both STS-117 mission specialists, participate in the mission's second planned session of extravehicular activity (EVA), as construction resumes on the International Space Station on June 13, 2007.

HOUSTON --A pair of astronauts will venture outside the International Space Station (ISS)one last time Sunday to prime the orbital laboratory?s newest solar wings torotate and track the Sun.

Atlantisshuttle astronauts Patrick Forrester and Steven Swanson are due to begin thefinal spacewalk of NASA?s STS-117 mission at 12:33 p.m. EDT (1633) and spendmore than six hours working on the station?s newstarboard trusses and other areas.

?There?snothing on this EVA that I think is challenging,? NASA ISS program manager MikeSuffredini said Saturday of the extravehicular activity (EVA). ?But they all willtake time, so how much of this we get done is to be determined.?

Forresterand Swanson are expected to perform a series of tasks carried over fromprevious STS-117 spacewalks, including engaging a cross-wired gear on thestation?s starboard side and coaxing a stubborn vent heat shield into place.

Inside the spacestation, six Russian control and navigation computers remain operational after beingfullyactivated Saturday after a major shutdown last week. Aside from the station?sRussian-built Elektron oxygen generator, which engineers are holding off onrestarting pending final checks, most of the systems affected by the glitch areback online, mission managers said.

?We can report that things arestill improving,? ISS flight director Holly Ridings said early Sunday. ?We?reback to almost nominal in terms of all the systems.?

On Monday,ISS flight controllers plan to activate the station?s Russian attitude controlsystem for about 45 minutes as a final check on the health of the computers,Ridings added.

The primarytasks for Forrester and Swanson revolve around the station?s new starboardSolar Alpha Rotary Joint (SARJ) that bridges the recently delivered Starboard 3(S3) and Starboard 4 (S4) truss segments installed during the STS-117 mission.

Duringtheir Wednesdayspacewalk, Forrester and Swanson were unable to completely remove a seriesof launch restraints that secured the SARJ inside Atlantis? payload bay for itsJune 8 launch. They also discovered that the two gear motors designed to drivethe SARJ?s rotation were cross-wired, with command for one affecting the other,but were unable to verify that both were engaged at the time.

The twospacewalkers are expected to pick up where they left off on their last EVA toprime the SARJ which, once freed, will be able to rotate its new starboardsolar arrays like a Ferris wheel to track the Sun. They will also clear theS3/S4 segments of obstructions on rails for the station?s railcar-like MobileTransporter, which serves as a base for the outpost?s robotic arm, so it canaid in ISS assembly tasks on the new truss.

If timeallows, the spacewalkers may also revisit a recalcitrant hydrogen vent heat shieldon the station?s Destiny module. Fellow STS-117 spacewalkers James Reilly andDanny Olivas were unable to reattach it Friday after installingthe new vent, NASA said. They are also expected to route a computer cablealong the exterior of the station's Unity node, the agency said.

Suffredinihas said that he hopes the spacewalkers will have time to install a videocamera stanchion - to free up hardware to be discarded on a future spacewalk -and engage locks on a broken antenna so it can be returned to Earth for repair.