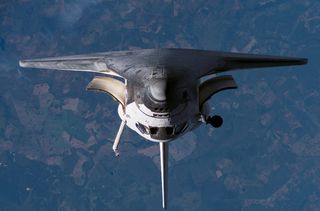 A view photographed from the International Space Station shows the Space Shuttle Atlantis backdropped over terrain as the two spacecraft were nearing their much-anticipated link-up in Earth orbit on June 10, 2007.
(Image: © NASA.)

HOUSTON --NASA mission managers cleared the space shuttle Atlantis for its plannedlanding next week after finding its protective heat shield sound for the plungethrough Earth?s atmosphere.

One last,now-standard heat shield survey is scheduled for Atlantis to ensure tiny spacerocks or debris have not damaged the shuttle since its June 8launch.

Earlier in the mission, Atlantis?seven-astronaut STS-117 crew scannedthe vital heat-resistant tiles and panels along the shuttle?s wing edges,nose cap and underbelly with a sensor-laden boom to seek out any signs ofsignificant damage. Astronauts aboard the ISS also snapped high-resolutionimages of the shuttle while it performed a back flip just beforedocking at the orbital laboratory on June 10.

NASA has kept close watch on theintegrity of shuttle heat shields since 2003, when a piece of shuttle fuel tankfoam fell free during launch and pierced heat-resistant panels on the Columbiaorbiter?s left wing. The damage led to the loss of the spacecraft and itsseven-astronaut crew.

As an added safety measure, theSTS-117 crew will perform a now-standard second heat shield survey, known as a ?lateinspection? and is nearly identical to the first, once Atlantis casts offfrom the ISS. The survey will scan for any damage sustained by micrometeoritesor space junk.

The shuttle is currently slatedto undock from the space station on Tuesday en route for a planned June 21landing, but carries enough supplies to spend one extra day docked at the ISSif needed, NASA said.

Sturckow and his crewmates arein the midst of a planned 13-day mission that has, to date, successfully delivereda new crewmember to the ISS and installed new starboard trusses and solararrays for the orbital laboratory. The mission is NASA?s first of up to four shuttle flights this yeardedicated to space station construction.