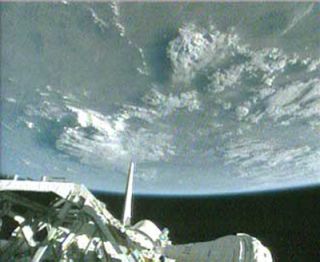 A video camera aboard Atlantis captured this view of the Earth and the shuttle's payload bay.
(Image: © NASA TV.)

HOUSTON ?An orbital inspection of the shuttle Atlantis by astronauts today revealedlittle damage to the orbiter?s heat shield after launch, and NASA mission managers say they are not overly concerned about a small pieceof torn insulation near the rear of the spacecraft.

The sevenSTS-117 astronauts spent their first full day in space performing a detailed,five-hour inspection of heat shielding on the wings and nose of theirvehicle following its Friday liftoff.

?With FlightDay Two activities, you?re just going around and assessing how the vehicle performedduring ascent, and I am very happy to say that it performed very well,?said John Shannon, chairmen of NASA?s Mission Management Team.

Ofparticular concern was how the shuttle?s extensively repaired external fueltank would perform, after a freak hailstorm in February gouged thousands ofdents and divots in its foam insulation.

?From whatwe can tell so far, we did not lose any of the repairs,? Shannon said.?Everything looks exactly like it should, [it] looks like everything stayed inplace.?

Engineersare also analyzing imagery of a 4-inch by 6-inch (10-centimeter by15-centimeter) section of overturnedinsulation blanket on the shuttle?s left, aft-mounted Orbital ManeuveringSystem (OMS) pods discovered by the astronauts Friday night after reachingorbit. The current hypothesis is that heat transferred from nearby thermalprotection tiles during the shuttle?s climb into space caused a piece of theblanket to become unstitched.

?There?snot a great deal of concern over it right now, but there?s a lot of work leftto be done, and we?ll do that in the coming days,? Shannon said.

He addedthat NASA is prepared to deal with the upturned blanket section if engineersdecide it is problematic for Atlantis? reentry.

?We have alot of different options that we can do to go address it,? Shannon said,including tucking the blanket back beneath the tiles, trimming it down, orcovering it with a new tile.

The STS-117crew is scheduled to perform up to four spacewalks to install newtruss segments and solar arrays on the space station. It should be possibleto squeeze a shuttle repair mission into one of them if necessary, Shannonsaid.

A similarblanket flare-up was observed on the windshield of Discovery during STS-114 in 2005 but posed noproblems for reentry.

STS-117commander Rick Sturckow and his team will have a busy day ahead of themtomorrow, as they prepare Atlantis for its rendezvous with the InternationalSpace Station (ISS) Sunday afternoon.

?Atlantisis on her way to the ISS, and her crew is ready and waiting for us,? said leadshuttle flight director Cathy Koerner.

Shortlyafter docking, the ISS and shuttle crews will transfer the new truss segmentsfrom Atlantis to the space stations? robotic arm, where it will awaitinstallation. Also on tap for tomorrow is the official crew exchange betweenSTS-117 mission specialist Clay Anderson and Expedition 15 flight engineerSunita Williams.