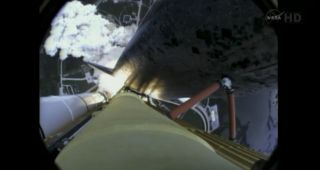 The camera mounted on Atlantis' external tank shows a unique view looking back towards the ground as Atlantis launches.
(Image: © NASA TV)

The space shuttle Atlantis' astronauts have begun a careful inspection of their orbiter's heat shield today (July 9) to make sure it wasn't damaged during the shuttle's final launch Friday (July 8).

Atlantis lifted off from NASA's Kennedy Space Center in Cape Canaveral, Fla., on the 135th and final mission of NASA's 30-year space shuttle program. The orbiter is now playing catch-up with the International Space Station, where it plans to dock on Sunday (July 10).

Commander Chris Ferguson and his four-person crew will spend about six hours on their second day in space conducting a detailed scan of the thermal insulation tiles on Atlantis' underbelly and wings to make sure they weren't damaged during launch.

The inspection has been a routine precaution taken on every mission after the space shuttle Columbia and its seven astronauts were destroyed in 2003 because of damage to that orbiter's heat shield. The protective tiles on the shuttle are necessary to shield the orbiter from the intense heat of re-entry to Earth during landing.

Preliminary analysis of footage from Atlantis' 11:29 a.m. EDT (1529 GMT) blastoff did not indicate any major cause for concern, NASA officials said. But the inspection should provide more detailed readings to ensure the orbiter was not dinged by falling ice or foam debris from the shuttle's huge external fuel tank. [Video: Last Launch Of Shuttle Atlantis]

The Atlantis astronauts began the scan at 8:19 a.m. EDT (1219 GMT), after waking up at 3:59 a.m. EDT (0759 GMT). The spaceflyers are using a 50-foot (15-meter) sensor-tipped inspection pole attached to the end of the shuttle's robotic arm to inspect the spacecraft. Images and videos will be sent down to engineers at NASA's mission control center in Houston for review.

Flying along with Ferguson on the mission are pilot Doug Hurley and mission specialists Sandra Magnus and Rex Walheim. Each astronaut is a veteran and each has been to the space station before.

"Now, the configuration has changed a little bit over the years, so I think we’re all eagerly anticipating seeing what the space station looks like today," Ferguson said in a preflight NASA interview.

The primary goal of Atlantis' final mission is to deliver 9,500 pounds (4,318 kilograms) of spare hardware and supplies to outfit the International Space Station for the years ahead, after the shuttles retire. After this mission, NASA is mothballing Atlantis, Discovery and Endeavour to work on developing new spaceships to carry humans to an asteroid and Mars.

"It's a very busy mission," said Magnus in a preflight interview. "Our prime job is to take tons of logistics up to space station and get it up there while we still have the huge cargo-carrying capacity of the shuttle available."

This STS-135 mission is Atlantis' 33rd flight after nearly 26 years of operation. The shuttle is slated to land on July 20 and then be retired to the Visitor's Center at Kennedy Space Center.