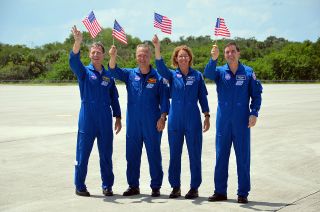 The four astronauts who will fly Atlantis on the final mission of NASA's space shuttle program have a busy mission ahead and an important legacy behind them.

The four crewmembers are slated to launch aboard Atlantis on Friday (July 8) at 11:26 a.m. EDT (1526 GMT) from NASA's Kennedy Space Center in Cape Canaveral, Fla. However, weather forecasts predict a murky 70 percent chance that rain will prevent a liftoff on Friday, so the mission may have to wait until the weekend or later to launch.

Ferguson completed his first spaceflight as pilot of Atlantis' STS-115 mission in September 2006. During the 12-day mission, the crew delivered and installed the International Space Station's massive P3/P4 truss segment and two sets of solar arrays.

Ferguson was also commander of Endeavour's STS-126 flight to the space station in November 2008. In total, he has logged over 28 days in space. From November 2009 to September 2010, Ferguson served as deputy chief of the Astronaut Office.

Ferguson has spoken about the enormous amount of pride he and his crewmates have in their vehicle, Atlantis, as well as the rest of NASA's shuttle fleet. As commander of the final flight, his focus has been on executing a successful mission, but the legacy of the agency's 30-year space shuttle program is not far from his mind.

"I'm not any more apprehensive or nervous about this mission coming off than any other one," Ferguson told SPACE.com. "In spite of the fact that there's been a lot of attention surrounding the mission because it's the last one, we still have a very tight timeline and a very complex mission to pull off. We want to put NASA's best foot forward, and I think that's on the back of everyone's mind. We want to go out with the respect and the dignity that the shuttle program deserves. I think we've been doing a nice job of that so far."

Doug Hurley, 44, is a lieutenant colonel in the United States Marine Corps who was born in Endicott, N.Y. A highly experienced pilot, Hurley has logged over 4,000 hours in more than 25 aircraft.

Hurley was selected to join NASA in July 2000, and reported for training at Johnson Space Center the following month. After completing stints as the lead Astronaut Support Personnel (ASP) for the STS-107 and STS-121 missions, Hurley served on the Columbia Reconstruction Team at Kennedy Space Center in Florida and was also the NASA Director of Operations at the Gagarin Cosmonaut Training Center in Star City, Russia.

Hurley completed his first spaceflight in July 2009 as the pilot on Endeavour's STS-127 mission, during which time he logged over 376 hours in space. Most recently, Hurley served as the safety branch chief in the Astronaut Office. Being able to fly on the final space shuttle mission is a great honor, Hurley said, and witnessing the capabilities of the iconic orbiters at a young age was what inspired him to become an astronaut.

"This is what I remember inspired me to get into this business, seeing this magnificent winged vehicle go into space for the first time," Hurley said.

Hurley is hoping the spectators who will be there in person to watch Atlantis' launch soak in the experience as they witness a key moment in history.

"Until you see one in person, you really haven't seen a shuttle launch," he said. "It really is an emotional experience to actually see the boosters light and see the shuttle head skyward as it starts to catch the space station. I want as many folks as possible to see a shuttle launch and realize what this country has accomplished."

Sandy Magnus, 46, is an engineer and a veteran spaceflyer. Born in Illinois, Magnus was selected to join NASA in April 1996. Prior to that, she worked for McDonnell Douglas Aircraft Company as a stealth engineer.

In October 2002, Magnus completed her first spaceflight as part of Atlantis' STS-112 mission, logging a total of 10 days, 19 hours and 58 minutes in space. In 2005, she began training for a long duration mission aboard the International Space Station.

For someone who is intimately familiar with life onboard the space station, Magnus is confident that following the retirement of the shuttle program, more attention will be paid to the cutting edge science being performed at the orbiting lab.

"I think what you'll see with the space shuttle retirement is you'll probably see more and more news about what we're doing on the space station," Magnus told SPACE.com. "The shuttles are just such an obvious, in your face, example of what we're doing in space, and people have been focusing on that for such a long time. But in the meantime, we have 10 years on the space station behind us, and a lot of experience there and a lot of great work done there that I think you'll see more and more in the news."

Rex Walheim, 48, is a retired colonel in the United States Air Force who hails from Redwood City, Calif. Walheim was selected by NASA in March 1996 and reported to the Johnson Space Center in August of that year.

A veteran of two space flights, Walheim has logged over 565 hours in space, including more than 36 hours in five spacewalks. He completed his first spaceflight as part of Atlantis' STS-110 mission in 2002. The mission delivered part of the International Space Station's backbone-like truss, and also marked the first time that the station’s robotic arm was used to maneuver spacewalkers around to facilitate their work.

Walheim flew again on Atlantis for the STS-122 mission, which launched in February 2008. On this flight, the orbiter delivered the European Space Agency's Columbus laboratory. Walheim performed three spacewalks to help prepare the new module for its scientific work.

A self-described "frequent flyer" on Atlantis, Walheim will ride the orbiter one last time on its STS-135 mission.

"I told them I only fly on Atlantis," Walheim joked during preflight interviews.

He also recalled the awe he felt as a student watching the very first launch of the space shuttle, and hopes Atlantis' space finale will inspire others as well, particularly those who are able to witness the event in person. [Video: Want to Feel a Shuttle Launch?]

"When you get to see a launch, it's not just witnessing a launch, you experience it," Walheim told SPACE.com. "It's something you hear, you feel, you experience. I think people will be proud to be part of a country that can take this magnificent vehicle and sling it into orbit, and just see the incredible power and majesty of this vehicle taking off. It's a real treat."