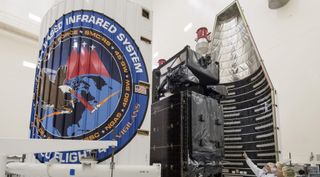 WASHINGTON — The U.S. military's newest missile-warning satellite is set to lift off later this week  just as tensions continue to mount over North Korea's ICBM program.

"Everything is progressing toward the ULA Atlas V launch carrying the Space Based Infrared System GEO Flight 4 mission for the U.S. Air Force," ULA announced on Monday. The forecast shows an 80 percent chance of favorable weather conditions for the planned 7:52PM EST liftoff on Thursday. [How Ballistic Missiles Work (Infographic)]

Lockheed Martin manufactured the satellite in Sunnyvale, California. It was delivered to Florida on Oct. 31 and encapsulated on Jan. 9. During encapsulation, the satellite was sealed in its launch fairing, an aerodynamic, nose-cone shell that protects the satellite during launch. In the days leading up to the launch, the fairing with the satellite enclosed will be mounted on top of the Atlas V rocket.

SBIRS is the United States' main source of persistent, space-based surveillance of missile launches around the globe.

The Flight-4 launch comes less than a year since SBIRS GEO Flight-3 sent its first images down to Earth in a milestone known as "first light." These two satellites join SBIRS GEO-1 and GEO-2, which have been in operation since 2013.

The Center for Strategic and Budgetary Assessments estimated that total costs for the two payloads and four geo satellites, plus ground support, come to approximately $13.6 billion. Each satellite with spares and accessories is estimated to cost $1.7 billion. The Pentagon requested $1.3 billion in 2018 for SBIRS — $862 million more than was appropriated in 2017.

The Air Force plans to soon move forward with the next batch of satellites, GEO-5 and GEO-6. Lockheed Martin intends to use a modernized LM 2100 satellite bus. After a "critical design review" in September, the Air Force, authorized the GEO 5 and 6 satellites to begin the manufacturing and integration phase.

The SBIRS satellites are equipped with powerful scanning and staring infrared surveillance sensors that collect data for use by the U.S. military to detect missile launches, support ballistic missile defense and gather broader intelligence.