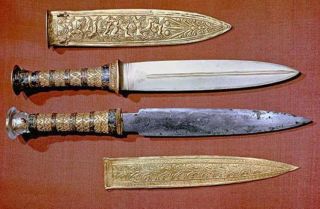 The iron dagger found in the tomb of the Egyptian pharaoh Tutankhamun dates to around 1350 B.C., about 200 years before the Iron Age.
(Image: © Albert Jambon)

Daggers, axes and jewelry made from rare iron during the Bronze Age are literally out of this world, according to new research finding that ancient artisans crafted these metal artifacts with iron from outer space carried to Earth by meteorites.

The finding upends the idea that a few artisans during the Bronze Age in the ancient Near East knew how to make iron by smelting it from Earth's crust.

Instead, it appears that Bronze Age metalworkers sought out meteorites to make these treasures, said study author Albert Jambon, a French archaeo-metallurgist and a professor at the Pierre and Marie Curie University, in Paris. [See Photos of King Tut's Dagger & Other Old Iron Objects]

"Iron from the Bronze Age are meteoritic, invalidating speculations about precocious [early] smelting during the Bronze Age," Jambon wrote in the study.

Jambon tested the ancient iron daggers, including one from Pharaoh Tutankhamun's tomb in Egypt, iron axes and pieces of iron jewelry from the ancient Near East and China with X-ray scans to identify their metals.

Last year, a study using X-ray fluorescence (XRF) spectrometry determined that Tutankhamun’s dagger was made with iron containing nearly 11 percent nickel and traces of cobalt: a characteristic of extraterrestrial iron found in many of the iron meteorites that have rained down on Earth for billions of years.

Most of the iron meteorites that smash into Earth each year are thought to have formed in the metal-heavy cores of planetesimals — small bodies in the protoplanetary disk of debris that orbited the sun during the early stages of the solar system.

As a result, these meteorites contain high levels of nickel or cobalt. In contrast, iron smelted from terrestrial iron ores, which are mined from our planet's outer crust, contain less than 1 percent nickel or cobalt, far less than the levels found in iron-rich space rocks.

Jambon used a portable XRF analyzer to scan other ancient iron objects and iron meteorites in museums, as well as iron in private collections in Europe and the Middle East.

His research showed that all the iron in the tested artifacts came from meteorites, and not from terrestrial smelting, he told Live Science in an email.

The findings suggested that iron meteorites were the only source of that metal until the discovery of smelting iron from terrestrial iron ore, probably in Anatolia and the Caucasus around 3,200 years ago, Jambon said.

Jambon examined some of the most ancient iron objects ever found, including sheet-iron beads from Gerzeh in Egypt, dated to 3200 B.C.; an ax from Ugarit on the coast of northern Syria, dated to 1400 B.C.; a dagger from Alaça Höyük in Turkey, dated to 2500 B.C.; and three iron objects from Tutankhamun's tomb, dated to 1350 B.C. — a dagger, a bracelet and a headrest.

Some archaeologists have proposed that these early iron objects could have been created by "precocious" smelting of iron ore nearly 2,000 years before the technology became widespread in the early Iron Age — perhaps by accident, or through experimentation.

But Jambon said his research found no evidence that smelted iron was known until the Iron Age dawned in the Near East, around 1200 B.C. The oldest-known furnace for smelting iron ore, at Tell Hammeh in Jordan, dates to 930 B.C., he noted. [Photos: Ancient Burial and Metal Tool from Southern Levant]

"We know from texts that during the Bronze Age, iron was valued 10 times as much as gold," Jambon said. "[But] in the early Iron Age, the price fell dramatically to less than that of copper, and this is the reason why iron replaced bronze quite rapidly."

His analysis also showed that Tutankhamun's dagger, bracelet and headrest were made from the iron of at least two different meteorites, suggesting that an active search was carried out for valuable iron meteorites in ancient times, he said.

Jambon hopes to scan more ancient iron with XRF spectrometry, but access to these items is not always possible, especially in conflict zones like Syria and Iraq. Even studying artifacts in museums can be challenging, he said.

"For obvious reasons, curators are reluctant to carry artifacts to a foreign institution, and this is why we need to travel,” he said: "This is why the portable XRF analyzer changed the deal."

Jambon hopes his research will form the basis of a hunt for the earliest smelted irons on Earth. "The very first irons will be recognized from their chemical composition, which markedly differs from meteoritic iron," Jambon said. "Such analyses should be done for all irons between 1300 [B.C.] and 1000 B.C."

"[This method] opens the possibility of tracking when and where the first smelting operations happened, the threshold of a new era,” he wrote in the study, published in the December issue of the Journal of Archaeological Science.