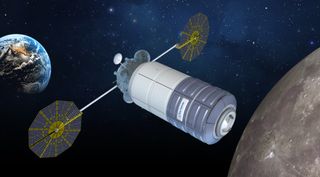 Orbital ATK, one of the companies Thales Alenia is working with on NextSTEP-2, has proposed using a version of its Cygnus cargo spacecraft as part of NASA's proposed Deep Space Gateway.
(Image: © Orbital ATK)

WASHINGTON — Thales Alenia Space is partnering with three U.S. companies that are working on NASA studies of concepts for the proposed Deep Space Gateway, leveraging its expertise in space station and cargo module development.

Thales announced Dec. 14 that Boeing was the latest company it was working with as part of NASA's Next Space Technologies for Exploration Partnerships (NextSTEP) 2 effort. Thales has previously also been working with Lockheed Martin and Orbital ATK. Thales did not disclose the value of the individual contracts with the three companies.

For all three companies, Thales is providing expertise in areas such as structures, environmental controls and thermal controls, said Walter Cugno, vice president of Thales Alenia Space's exploration and sciences domain, in a call with reporters. The company's contributions are currently limited to studies, he said, and does not include hardware at this time. [Related: Humanity's Move Into Deep-Space Is Inevitable]

Boeing, Lockheed Martin and Orbital ATK are three of the six companies that received NextSTEP-2 awards from NASA in 2016. The other awardees are Bigelow Aerospace, NanoRacks and Sierra Nevada Corporation. The awards are structured as public private partnerships, with companies contributing their own funds in addition to NASA funding, which has a combined value of $65 million.

Most of the companies with NextSTEP-2 awards are working on concepts for habitation modules that could be used on missions beyond Earth orbit, such as the agency's proposed Deep Space Gateway in cislunar space. The awards cover technology development as well as construction of groundbased prototypes.

The NanoRacks award, part of a consortium that includes Space Systems Loral and United Launch Alliance, was focused on a short-term study examining the feasibility of converting an Atlas 5 upper stage into a habitation module that could be attached to the International Space Station or commercial station. The company said that study, recently completed, confirmed that approach was viable.

Thales Alenia Space is taking different approaches with the three NextSTEP-2 companies it is working with. The work with Orbital ATK, Cugno said, is focused on adapting the Cygnus spacecraft for deep space applications. Thales Alenia provides the pressurized cargo module for Cygnus cargo missions to the space station.

The work with Boeing and Lockheed Martin, he said, is based on those companies' own, separate concepts for habitation modules. "We use our knowledge on thermal, mechanical and environmental designs and system architecture, but implementing that in slightly different applications," he said.

That work, he added, is informed by the experience Thales has from developing modules for the ISS. "We try to fit that into a very different environment," he said. The work is expected to take place through 2018 and into 2019.