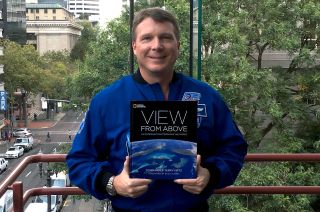 If, in fact, a picture is worth a thousand words, then astronaut Terry Virts has volumes to say about the view from space.

So much so, that the 300 photographs that fill the pages of his new book represent less than one tenth of one percent of all the photos he took in space. And that was just from one of his two flights to the International Space Station.

In "View from Above: An Astronaut Photographs the World," published on Tuesday (Oct. 3), Virts collaborates with the photo editors at National Geographic to offer a visually spectacular account of his seven months orbiting Earth. [Space Photos: Astronaut Terry Virts on the International Space Station]

"My goal in 'View from Above' was to share the experience of spaceflight in book format as best as I could," said Virts in an interview with collectSPACE.com. "It is most definitely not an 'astronaut memoir,' but neither is it simply a photography atlas of the Earth or space."

"I really wanted to capture what it is like to fly a space mission — from common events like launch and landing and spacewalking, but also what it was like to see Earth for the first time, or experience emergencies while in space, or learn how to float," said Virts, who retired from NASA's astronaut corps in 2016. [Watch: Terry Virts Talks Space Photography with Space.com]

Virts first launched on the space shuttle Endeavour in 2010, serving as pilot for the mission that delivered and installed the station's Cupola. Four years later, he used that same multi-windowed room to capture hundreds of thousands of photographs — 319,275, to be exact — of the planet below. (To be even more exact, some of those 300,000 images included observations from other parts of the station and of life aboard the orbiting laboratory, too.)

"There are so many that I loved," said Virts when asked about his favorite photos, "especially sunsets, sunrises and wide angle 'Earth shots.' There was a northern lights sequence that I took over northern Europe that was spectacular, and, well, I could go on."

"But on my last day in space, I went down to the Cupola, took the scratch pane off, set the camera at f/22 [focal point 22] to get a 'starburst' pattern, and took a wide angle shot of the sun and the Earth's limb. I looked at the preview on the camera screen, realized that was the best picture I'd ever taken."

That same image, taken just before Virts left the space station for Earth on June 11, 2015, appears as the last photograph in the book.

"I thought to myself, OK, that's it, I'm never going to top that. What an awesome ending to my time on the station. My most important work in space, in my opinion, was photography and the impressions of space that I can share with others. This truly was saving 'the best for last,'" Virts writes in "View from Above."

The 304-page book is organized by the different stages of a space mission, with chapters devoted to "Leaving Earth," "Our Place in the Universe," "Deliveries from Home" and "Return to Earth." Amid Virts' narrative and his captions, are also a selection of tweets that Virts posted to Twitter while on the space station.

And then there are the "Viewfinders."

"'Viewfinder' alludes to the eyepiece of a camera that you look through," explained Virts. "At the end of each chapter we included some photos that are presented full page. It's just a —pretty cool, in my opinion — way to show the reader some of the best images at full size, and not cropped down in the middle of the chapter."

"View from Above" is not the first book to focus on astronaut photography. NASA, itself, published two volumes of Earth images taken on board its Gemini two-man missions 50 years ago. In the decades since, coffee-table-style books compiled by the Association of Space Explorers ("The Home Planet, 1988") and by individual astronauts (including Jay Apt's "Orbit: NASA Astronauts Photograph The Earth," published in 1996 by National Geographic) have offered a look back at the planet where we live.

"I have always loved space photography books, since I was a child," said Virts. "[Astronaut] Don Pettit was actually a great mentor to me as he helped me learn about photography during my years as an astronaut and has quite a beautiful book himself."

"I wanted to do something different than these, though," Virts said.

Virts acknowledges that the photos will be the major draw for "View from Above," but he hopes readers take the time to read his narrative, too.

"Honestly, I'm most proud of the writing," he told collectSPACE. "It would be great to simply look at the photos in the book, but I think that it would be much better to combine that with the stories that I tell, to get the full experience of what it Is like to fly in space."

Virts' story is endorsed by another astronaut who ventured beyond Earth and who penned the foreword for "View from Above."

"I feel he still has much to contribute to the world with his experiences, and I hope he will carry on the spirit of Apollo and the shuttle era into the Mars era."

"View from Above: An Astronaut Photographs the World" by Terry Virts is available now from National Geographic.

See a gallery of Terry Virts' photos from "View from Above: An Astronaut Photographs the World" at collectSPACE.