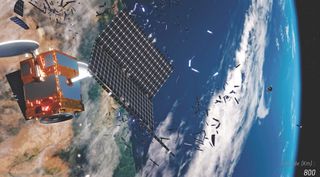 With the lack of an international accord to mitigate the growth of orbital debris, countries are relying on bilateral and international partnerships on issues like space situational awareness.
(Image: © ESA)

WASHINGTON — International cooperation in dealing with the growing problem or orbital debris is essential, a panel of experts argued, but said not to expect a comprehensive accord on the issue for the foreseeable future.

At a discussion about international approaches to orbital debris, organized by the Aerospace Corporation here Sept. 21, panelists from the United States and several other nations emphasized bilateral and multilateral approaches over comprehensive international accords, like a proposed International Code of Conduct for Outer Space Activities.

That proposed code, introduced by the European Union in 2008, included a number of provisions intended to reduce the chance of collisions and minimizing the creation of debris, either though accidental or deliberate actions. While the code had the support of some major space nations, including the United States, opposition from others has effectively blocked its progress. [The Worst Space Debris Events of All Time]

Michiru Nishida of the Japanese Embassy's political section noted on the panel that Japan has supported development of the code. "Unfortunately, due to various factors, including strong opposition from certain countries, the progress of this rulemaking for the code of conduct is currently suspended," he said.

Later in the panel, he said he was skeptical that there would be near-term progress in reviving the code. "I don't see much prospect for that," he said.

"I don't believe the new administration here in Washington has outlined its view," he said. "At some point in the near future I'm sure it will once they conduct their space review."

Nishida and Rose instead supported an ongoing effort by the United Nations Committee on the Peaceful Uses of Outer Space to develop guidelines for what it calls the long-term sustainability of space. That effort includes space debris and other issues. The committee approved an initial set of guidelines last year and plans to submit a complete set to the UN General Assembly in the fall of 2018.

"I think we've actually made very good progress with the technical experts at the UN Committee on the Peaceful Uses of Outer Space," Rose said. "We still have more work to do, but I think we're making progress."

"Over the last decade, U.S.-Japan space cooperation has, I like to say, expanded beyond our wildest belief," Rose said. That growth, he said, was enabled by a change in Japanese law in 2008 that ended a prohibition on national security space activities. "As a result, we can cooperate with Japan on the full spectrum of issues: civil space, but also national security space. That is a big deal."

Jan Drobik, minister-counsellor for defense, science and technology at the Australian Embassy, said his country, despite lacking a space agency or strong space industry, has found ways to cooperate on space situational awareness with the U.S. and others by leverage its capabilities, such as the ability to host tracking assets.

"We're pushing this partnership model. We can't do it alone," he said. "We occupy a unique piece of geography in the Southern Hemisphere: a safe, stable political environment. That enables us to have a range of terrestrial-based space tracking facilities."

Neville Clayton, who serves on the defense staff at the British Embassy, said he was encouraged by comments by U.S. Air Force officials at the recent Air, Space and Cyber Conference that talked about the importance of international cooperation. However, he said those broad comments don't always translate at the operational level. [From SpaceNews: Space Debris Is More Than a Nuisance]

"I'm absolutely convinced that we have senior leadership buy-in into this, but sometimes we're a bit stymied at the tactical level, when people are just prone to overclassify things, and that makes the access and that partnership more difficult," he said.

Such partnerships among countries, panelists said, can address orbital debris mitigation and space security issues to at least a degree in the absence of a broader international accord. Rose said that, despite broader geopolitical issues in the U.S.-China relationship, the countries have recognized it is in the benefit of both countries to mitigate the growth of orbital debris.

"In the near term, I don't think the prospects of a code of conduct are particularly positive, but I think there's a lot of work we can do," he said.