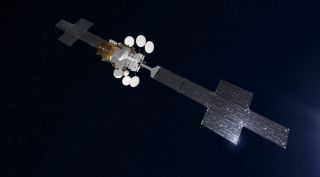 SES says it would rather build satellites tailor-made for specific markets and applications over pursuing the highest throughput satellite possible.
(Image: © SES)

WASHINGTON — Global fleet operator SES says it could join the race to build the world's highest-throughput satellites if it wanted to, but doesn't believe such spacecraft will be effective at serving customers.

"SES is the largest satellite operator in the world today," Andrew Ruszkowski, vice president of SES's strategic initiatives in mobility, said June 8 at the Global Connected Aircraft Summit here. "If we wanted to, we could launch by far the largest-capacity satellite in the world. However, we have concluded that doesn't make sense for our customers, nor for our business."

Without naming them specifically, Ruszkowski was referring to the efforts of companies such as ViaSat, OneWeb and Hughes to deploy increasingly higher-throughput satellite systems at a faster pace than the industry average.

Carlsbad, California-based ViaSat, which on June 1 launched ViaSat-2 to provide at least 280 Gbps of capacity over North America, has plans for a trio of satellites each capable of 1 terabit of total throughput.

OneWeb says its initial system of 900 low-Earth orbit Ku-band satellites will have a total throughput exceeding 7 terabits per second. Those satellite start launching next year.

EchoStar subsidiary Hughes launched Jupiter-2 in December with 220 Gbps of capacity, and has mentioned work on a next-generation Jupiter-3 system, but without giving away many details.

Addressing an audience of largely aviation industry players, Ruszkowski said the apparent trend toward fielding the highest capacity satellites possible is not one SES intends to follow.

"If it were the case that an airline were only concerned about the total capacity of the satellite, or a constellation of satellites, maybe this would be true, however in my experience, airlines are far more concerned about performance, about reliability, about flexibility and sustainability," he said. "I believe that the surest way to achieve those critical decision factors is through satellites that are designed specifically as the right size, and as a part of a scalable constellation that addresses all of those needs."

Ruszkowski highlighted SES-17, a Ka-band satellite ordered from Thales Alenia Space in September 2016, as an example. He said SES-17 will sport onboard capabilities such as load balancing to follow the traffic patterns of aircraft as they change throughout the day.

"It's an HTS satellite with the throughput you gain from those satellites, but it's right-sized for that application," he said.

SES-17 will have around 200 spot beams and use all-electric propulsion. Thales InFlyt Experience is an anchor customer for SES-17, intending to use the satellite for internet access on planes after it launches in 2020.