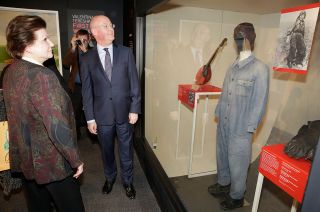 Valentina Tereshkova, the first woman in space, views an exhibit of artifacts and photographs dedicated to her life with Ian Blatchford, the director of the Science Museum, London, on March 15, 2017.
(Image: © Science Museum)

A new exhibition in London celebrates the life of the world's first woman to fly into space, from her days as a factory worker through her 1963 flight into Earth orbit to her continuing role as a global icon for her country.

"As the first woman in space, and still the only one to have flown a solo space mission, her story continues to be an inspirational one for millions," exhibit curator Doug Millard, the deputy keeper of technologies and engineering at the Science Museum, said. "Valentina Tereshkova epitomizes the can-do spirit that propels humanity to great things."

A textile factory worker who trained to skydive, Tereshkova was one of the first five women to be selected out of more than 400 applicants to become a cosmonaut. On June 16, 1963, she launched on the former Soviet Union's Vostok 6 spacecraft, becoming the first woman to fly in space. [Women in Space: A Gallery of Firsts]

Tereshkova returned to Earth after rounding the planet 48 times over the course of three days, logging more hours in space than all of the American astronauts combined up to that date. It was another 19 years before the next woman flew into space, and Tereshkova remains the only woman cosmonaut to have launched alone.

Though she only flew one mission, Tereshkova's popularity launched a career in politics that continues to this day as a current member of the State Duma, the lower house of the Russian legislature. She also represents her nation on the global stage, earning recognition from the United Nations and leading delegations in support of women's rights.

"What better time to pay tribute to the achievements of such a heroic and pioneering woman than during Women's History Month?" Ian Blatchford, the director of the Science Museum Group, said in a statement. [How Valentina Tereshkova's Vostok 6 Flight Worked (Infographic)]

To mark the exhibit's debut and in celebration of her 80th birthday earlier this month, Tereshkova visited the Science Museum on Wednesday (March 15), where a gala evening welcomed her with the premiere of the commissioned film, "Legend of Valentina," accompanied by a performance by the Russian Philharmonic Orchestra and virtuoso violinist Dmitri Kogan.

Among the items on exhibit in "Valentina Tereshkova: First Woman in Space" are her domra, a long-necked Russian string instrument from her time in a local folk orchestra in the early 1960s, and her parachute kit, including her suit, helmet and gloves from before she became a cosmonaut. Also on exhibit is the black and white suit Tereshkova wore on a visit to her hometown after her 1963 spaceflight and a chocolate bar named after her daughter, Alyonka, the "first space baby," who she had with fellow cosmonaut Andriyan Nikolayev.

"Valentina Tereshkova: First Woman in Space" continues a collaboration between Science Museum, London and the Russian State Museum Exhibition Center, which previously produced "Cosmonauts: Birth of the Space Age," featuring Tereshkova's Vostok 6 spacecraft, that was shown at the Science Museum from September 2015 to March 2016.

The current exhibit, open through Sep. 16, is also a central event as part of the Year of Science and Education of the United Kingdom and Russia in 2017, organized by the UK Embassy in Moscow and the British Council.

In addition to Tereshkova exhibition, the Science Museum, London also displays NASA's Apollo 10 command module, "Charlie Brown," on loan from the Smithsonian, and Soyuz TMA-19M, the Russian capsule that took British astronaut Tim Peake to the International Space Station in 2015-16.

The Science Museum has announced a companion virtual reality attraction, "Space Descent VR," which beginning on March 24 will give guests the chance to virtually join Peake in his capsule for a 360-degree tour as they experience his journey back to Earth.