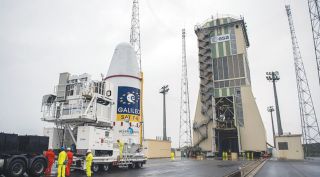 Galileo 7 and Galileo 8 being moved to the launch pad in 2015.
(Image: © ESA-CNES-ARIANESPACE/Optique vidéo CSG)

PARIS – Ten atomic clocks have failed onboard the European Union's Galileo navigation satellites, casting doubt on when the unfinished constellation's next batch of spacecraft will be orbited.

European Space Agency Director-General Jan Woerner told reporters Jan. 18 that the agency has not decided whether to go ahead as planned with an Ariane 5 launch in August of the next batch of four Galileo spacecraft. The launch is one of two scheduled over the next two years to complete the constellation of 26 needed to give Europe's GPS alternative global coverage.

"We have to find some systematic root cause, or go on [launching] and say, 'OK, there might be some failures'," Woerner, said during the agency's annual briefing at its headquarters here. "Should we not launch until [we have] solved the problem? We are right now in this discussion as to what to do." [Watch Awesome Views of Galileo Satellite Launch]

In a statement released after the briefing, ESA said that it was committed to launching the next four satellites before the end of the year. Galileo's launch service provider, Arianespace of Evry, France, has said it expects to conduct eight Ariane 5 campaigns this year — one more than it squeezed into 2016.

Galileo's rash of atomic clock failures have involved both types of clocks aboard the 18 Galileo satellites launched to date. Three of the clocks that failed were rubidium atomic frequency clocks and seven were newer, more-precise passive hydrogen maser clocks, one of which has since restarted. Swiss firm Spectratime produces both clocks, but the company declined to comment.

ESA said in its statement that while investigations continue, the 22-nation space agency and its industrial partners have agreed "that some refurbishment is required on the remaining [rubidium] clocks still to be launched on the eight Galileo satellites currently being constructed or tested.

"A plan to refurbish the remaining [hydrogen maser] clocks still to be launched is currently being finalised," the statement said.

So far, the clock failures have yet to sideline any of the in-orbit Galileo satellites, which are equipped with two of each kind of clock for redundancy.

ESA's post-briefing statement said that, "in recent months a total of three [rubidium] clocks have undergone unexpected failure on Galileo satellites — all on Full Operational Capability (FOC) satellites, the latest Galileo model." The agency thinks short circuits caused the failures. One FOC satellite suffered a hydrogen maser clock failure. The 14 operational FOC satellites launched since August 2014 were built by OHB System AG of Bremen, Germany, which referred all questions about the failures to ESA.

While the four Galileo In Orbit Validation (IOV) satellites that Airbus Defence and Space built and launched between 2011 and 2012 have not suffered any rubidium clock failures, five hydrogen maser clocks aboard the IOV satellites have failed within the past two years. ESA said in its post-briefing statement that it thinks those failures can be attributed to the clocks being switched off for long periods.

China and India use the same Spectratime-built atomic clocks for their satellite navigation systems. Woerner said that ESA had contacted India about the problems.

Despite having only 18 of the planned 26 satellites in orbit, ESA's customer, the EU's European Commission, announced Dec. 14 that Galileo was now offering its initial services. Galileo was originally planned to be operational in 2008 with 30 spacecraft. During the briefing, Woerner defended program, saying Galileo was about technology leadership, independence and competitiveness. The most recent Galileo launch was Nov. 17, when an Arianespace Ariane 5 rocket lifted off from Europe's Guiana Space Centre in Kourou, French Guiana, carrying Galileo 15 through 18. All previous Galileo launches were by Soyuz-Fregat rockets.

Another failure Woerner addressed in the briefing was the ExoMars mission's 300-kilogram Schiaparelli lander which crashed into the Red Planet in October. "The lander engine stopped after 3 seconds, the on-board [computer's] understanding of the data [was that it was] already below the surface of Mars and so the parachute was separated and computer stopped the [retrorocket] engine," he said. "It looks like the root cause came from some [data] saturation of the gyros[copes]. Information coming to the computer was in contradiction," leading the computer to believe it was beneath the Martian surface.

The problem needs to be solved before the ESA-Russian ExoMars campaign launches its rover in 2020. "[The] wrong decision of [by the] computer has to be investigated for [the] 2020 [rover] mission because that would be a disaster [if that crashed]," Woerner said.

But that is not the only problem ExoMars has: missing funds could yet add to its woes. At the ESA member states' budget setting summit in Lucerne, Switzerland, in early December, Woerner only got 340 million euros ($363 million) for the rover mission when the agency needed 440 million euros.

Woerner said during the Jan. 18 briefing here that the gap could be filled with an additional 113 million euros added to the agency's science, basic activities and education budgets. But, he admitted, "if [the] inflation rate increases dramatically, we [will] have to ask the member states again."

During the annual briefing, Woerner also addressed what the agency had achieved in 2016, what it planned to do in 2017, and commented on future astronaut missions; the lack of any direct impact from Brexit; his contact with U.S. President-elect Donald Trump's NASA transition team; plans for more air traffic control from space; the launch of the first SmallGEO program derived telecoms satellite, and Europe's civilian X-37B, the Space Rider.