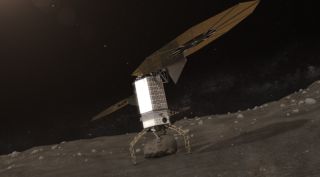 A provision of a NASA authorization bill introduced in the Senate Sept. 15 requires NASA to study alternatives to its Asteroid Redirection Mission.
(Image: © NASA artist's concept)

WASHINGTON — A bipartisan NASA authorization bill introduced by several senators Sept. 15 would require NASA to evaluate alternatives to its Asteroid Redirect Mission (ARM) and develop a plan to transition activities currently performed on the International Space Station to commercial platforms.

The NASA Transition Authorization Act of 2016, sponsored by Sen. Ted Cruz (R-Texas), chairman of the Senate Commerce Committee's space subcommittee, is intended to address policy issues and give the agency some degree of certainty as a new administration takes office in January.

"This NASA reauthorization bill brings us one step closer to reasserting American leadership in space by ensuring NASA has the certainty it needs to continue to grow and improve upon what it does best: lead the world in space exploration," Cruz said in a Sept. 16 statement announcing the bill.

The bill does authorize funding for fiscal year 2017, allocating $19.5 billion for the agency. The bill authorizes about $200 million more for NASA's exploration program than provided in a spending bill Senate appropriators approved earlier this year, but otherwise matches the amounts appropriated.

The primary purpose of the bill, though, is to enact policy provisions governing various NASA programs. Among them is language regarding ARM, a mission that involves sending a robotic spacecraft to retrieve a boulder from a near Earth asteroid and place it in lunar orbit to be visited by astronauts.

"It is the sense of Congress that the technological and scientific goals of the Asteroid Robotic Redirect Mission may not be commensurate with the cost," the bill states, referring to the robotic portion of ARM. Alternative missions, it says, "may provide a more cost effective and scientifically beneficial means to demonstrate the technologies needed for a human mission to Mars."

The bill directs NASA to evaluate alternative mission concepts to compare their scientific, technical and commercial benefits, as well as their costs, with ARM. That study would be due to Congress 180 days after the bill's enactment.

The bill also addresses planning for the eventual end of the ISS in the 2020s, stating that there is a need for an "orderly transition" from the current NASA-led management of the station to "a regime where NASA is one of many customers of a low Earth orbit commercial human space flight enterprise."

That provision would require NASA to assess its needs for continued research in low Earth orbit after the ISS is retired, the existing and projected commercial capabilities to meet those needs, and steps NASA can take to stimulate both the supply of commercial facilities and demand for their use. The bill also calls on NASA to study an extension of the ISS "through at least 2028" to identify the technical issues, scientific benefits, and costs of such an extension.

Other sections of the bill address human space exploration beyond Earth orbit, endorsing continued development of the Space Launch System and Orion spacecraft as well as deep space habitats that NASA has proposed developing for tests in cislunar space in the 2020s.

The bill specifically calls on NASA to develop a "strategic framework" for human space exploration that includes "a critical decision plan to expand human presence beyond low Earth orbit, including to cislunar space, the moon of Mars, the surface of Mars, and beyond."

That framework would include a series of objectives leading to humans orbiting or on Mars in the 2030s, identification of precursor missions in cislunar space, potential roles for international and commercial partners, and necessary technologies. The "critical decision plan" included in the framework would identify decisions that must be made by June 2020 to keep the overall framework on schedule.

One portion of the bill, called the "Scott Kelly Human Spaceflight and Exploration Act" after the former astronaut who spent nearly one year on the ISS, would give NASA the authority to provide medical monitoring for former astronauts to study the long-term effects of spaceflight. NASA has sought such authority in recent years, and it was the topic of a hearing by the House Science Committee's space subcommittee in June.

The Senate Commerce Committee is scheduled to mark up the bill Sept. 21, along with several other unrelated pieces of legislation. Congressional observers believe the most likely path to passage would be for the Senate to approve it by unanimous consent, an expedited process for bills with no opposition, then send it to the House for passage there. The House has passed NASA authorization bills of its own in recent years, but those bills were never taken up in the Senate.

Nelson, in a Commerce Committee statement, suggested that that Senate would take up a more comprehensive NASA authorization bill next year. "This will keep all of NASA's core missions on track through 2017," he said of this bill. "It's my hope Congress will reach consensus on multi-year spending plan next year that will provide the agency more certainty in carrying out its planned mission to Mars."