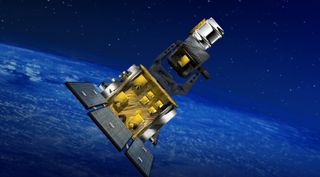 The current SBSS satellite, the Block 10 pathfinder, was launched in 2010 and performs its mission from a sun-synchronous, low Earth orbit. A follow-on system is scheduled to launch in 2021.
(Image: © Boeing)

WASHINGTON – After telling Congress it needed $11.5 million less than it expected this year for an upcoming space surveillance mission, the U.S. Air Force said July 22 it still plans to launch the next Space Based Space Surveillance (SBSS) system in 2021.

The current SBSS satellite, the Block 10 pathfinder, was launched in 2010 and is expected to last until about 2020, according to budget documents.

SBSS keeps tabs on the geosynchronous orbital belt, which is located some 36,000 kilometers above the equator and is home to the Air Force's most critical satellites. As a result, U.S. defense and other government officials, claiming space capabilities are increasingly threatened by Russia and China, have placed a high priority on the SBSS program. [Vintage Spy Satellites: Declassified Photos]

The follow-on mission had been described by the Air Force in 2014 as one that would feature as many as three dedicated government satellites. But industry officials said last year the Air Force also is open to hosting surveillance payloads on non-Air Force satellites.

For 2016, Congress appropriated about $27 million for activities related to space situational awareness systems, of which nearly all the money was set aside for the SBSS follow-on program.

Then, in a reprogramming request sent to lawmakers earlier this month, the Air Force said it needed just $15.8 million this year "due to re-phasing of the SBSS Follow-on program."

Capt. AnnMarie Annicelli, an Air Force spokeswoman, said in a July 22 email to SpaceNews that the SBSS funding "was aligned to match the adjusted program schedule, which allowed for the $11.5 [million] reduction."

She said the Air Force expects to release a solicitation for the SBSS follow-on by October with a contract award to follow about a year later. Annicelli said the launch of the follow-on system remains targeted for 2021, but did not otherwise detail how the program's schedule had changed.