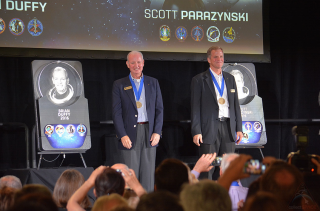 Veteran space shuttle astronauts Brian Duffy and Scott Parazynski were enshrined as the 92nd and 93rd members of the U.S. Astronaut Hall of Fame at NASA’s Kennedy Space Center Visitor Complex in Florida on Saturday, May 14, 2016.
(Image: © collectSPACE.com)

CAPE CANAVERAL, Fla. — The U.S. Astronaut Hall of Fame inducted its 15th class of space shuttle veterans Saturday (May 14), adding a commander and a spacewalker to the institution's ranks.

Brian Duffy and Scott Parazynski were honored during a public ceremony at NASA's Kennedy Space Center Visitor Complex in Florida. Standing in front of an audience that included their families, friends, space program co-workers and past Astronaut Hall of Fame inductees, the two men were celebrated under the retired space shuttle Atlantis, a spacecraft on which they both flew missions.

"The new heights we've reached thanks to astronauts like Brian and Scott have become so engrained in our culture that we don't always think about just how incredible — how absolutely incredible — all that we have achieved actually is," said NASA Administrator Charles Bolden, an astronaut and 2006 inductee. "One of the wonderful gifts of this Hall of Fame is it gives an opportunity to hit the pause button, to take a step back, take a deep breath for a moment and reflect on just how far we've really come."

Between them, Brian Duffy, a veteran U.S. Air Force pilot, and Scott Parazynski, a medical doctor, flew on board nine space shuttle missions between 1992 and 2007.

Duffy was the commander two of his four flights, including the 100th space shuttle mission, STS-92, which delivered a docking port and installed a segment of the International Space Station's backbone truss.

Parazynski conducted seven spacewalks over the course of his five shuttle missions. He flew with Mercury astronaut John Glenn on STS-95, helped to install the Canadarm2 robotic arm on the space station and repaired to a tear in one of the orbiting outpost's solar arrays.

He was also the first astronaut to summit Mount Everest, making Parazynski the only person to have both seen the world from orbit and stood on top of it.

"I have never seen a more vigorous adventure seeker than Scott Parazynski," said astronaut Kent Rominger, who flew with Parazynski on STS-100. "And so when I look at him amongst all of the astronauts I have been around, he truly represents an explorer."

Both Duffy and Parazynski said they were honored to join the ranks of the men and women they considered their role models.

"This is truly a humbling experience to be here joining my heroes," Duffy remarked. "These are the folks [who] as I was growing up, I watched do all these great things and I dreamed about what it might be like but never thought I'd have the chance. Joining you is a special treat for me."

"There are so many emotions that flip through you as you stand here on a day like today," shared Parazynski. "I am standing in front of men and women who have been my inspiration since I was a little kid."

Though now enshrined, Duffy and Parazynski will need to wait a bit longer to physically enter the U.S. Astronaut Hall of Fame.

The Hall's previous location in Titusville, Florida, closed in October 2015 so that it could move to the Kennedy Space Center Visitor Complex.

"Astronauts are such an important part of the NASA story. Through their eyes and stories we all have the chance to experience spaceflight as an insider. Soon their stories will be brought to life in an entirely new way," Therrin Protze, the chief operating officer of the visitor complex, said. "The [new] U.S. Astronaut Hall of Fame will be a component of the new 'Heroes and Legends' attraction opening later this year."

"Through state of the art technology, guests will have the opportunity to virtually interact with the astronaut inductees and experience the thrills of our space program like never before," he said.

At the close of Saturday's induction ceremony, Protze and Dan Brandenstein, chairman of the Astronaut Scholarship Foundation, revealed the plaques that will represent Duffy and Parazynski in the relocated Hall of Fame.

"I think it is fantastic," Parazynski said of his display. "The colors of the [space mission] patches are so high fidelity, I thought they really knocked it out of the park."

"It keeps you forever young," said Duffy of his likeness on the plaque. "I guess [that] is the way to look at it, because I may age a little bit but it's not going to.”

Watch a video of the 2016 Astronaut Hall of Fame induction ceremony at collectSPACE.