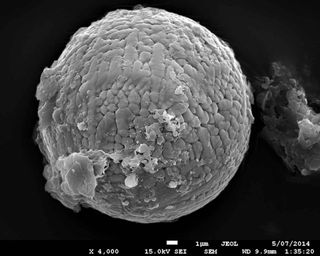 One of 60 micrometeorites extracted from 2.7-billion-year-old limestone, from the Pilbara region in Western Australia. These micrometeorites consist of iron oxide minerals that formed when dust particles of meteoritic iron metal were oxidised as they entered Earth's atmosphere, indicating that the ancient upper atmosphere was surprisingly oxygen rich.
(Image: © Andrew Tomkins)

The oldest space dust yet found on Earth suggests that the ancient atmosphere of Earth had significantly more oxygen than previously thought, a new study finds.

Although oxygen gas currently makes up about one-fifth of Earth's air, there was at least 100,000 times less oxygen in the primordial atmosphere, researchers say. Oxygen easily reacts with other molecules, which means it readily gets bound to other elements and pulled from the atmosphere.

Previous research suggests that significant levels of oxygen gas started permanently building up in the atmosphere with the Great Oxidation Event, which occurred about 2.4 billion years ago. This event was most likely caused by cyanobacteria — microbes that, like plants, photosynthesize and release oxygen. [Infographic: Earth's Atmosphere Top to Bottom]

In a new study, scientists analyzing tiny meteorites found that the upper reaches of the early Earth's atmosphere may not have been oxygen-poor as once thought. Instead, the ancient Earth's upper atmosphere may have possessed nearly the same amount of oxygen as it does today, the researchers said.

"With this project we have opened up a new way of investigating Earth's ancient atmosphere," said study lead author Andrew Tomkins, a geoscientist at Monash University in Melbourne, Australia.

The researchers analyzed 60 microscopic meteorites from samples of ancient limestone collected in the Pilbara region in Western Australia. These cosmic dust particles are 2.7 billion years old, the oldest yet found.

"We weren't certain that the project was going to work," Tomkins told Live Science. "The project started out as a student research project, and it was a bit of a risk to try and find micrometeorites when few other people had tried it before. I had some backup plans, but the extra tension made for a lot of excitement when we found our first micrometeorites."

The micrometeorites ranged from two to 12 times thinner than the width of an average human hair. They are cosmic spherules — remnants of meteorites the size of sand grains that broke apart during atmospheric entry. Previous research suggested that these kinds of particles melt at altitudes of about 45 to 55 miles (75 to 90 kilometers).

The scientists analyzed the micrometeorites using electron microscopes and high-energy X-rays from the Australian Synchrotron. They found that a significant portion of the iron in these meteorites had reacted with oxygen to form iron oxide minerals, which suggests that the thin upper atmosphere in which they melted was richer in oxygen than thought.

"Once we recovered the first micrometeorites, I realized that the minerals inside them were telling us that they had been oxidized in the upper atmosphere," Tomkins said. "These were essentially the first samples of our Earth's ancient upper atmosphere." [Fallen Stars: A Gallery of Famous Meteorites]

This finding was unexpected, "because it has been firmly established that the Earth's lower atmosphere was very poor in oxygen 2.7 billion years ago," study co-author Matthew Genge, a professor in the Department of Earth Science & Engineering at Imperial College London, said in a statement. "How the upper atmosphere could contain so much oxygen before the appearance of photosynthetic organisms was a real puzzle."

What could have happened?

One possible origin of this oxygen is that sunlight broke apart water vapor in the lower atmosphere into hydrogen and oxygen — the oxygen could have risen to the upper atmosphere, while the lighter hydrogen would have escaped Earth's atmosphere into outer space. Another possibility is that sunlight broke apart sulfur dioxide gas emitted from volcanoes into sulfur and oxygen — the sulfur could have condensed to form particles that fell to Earth, leaving oxygen behind, the researchers said.

"A caution — it's important to understand that the density of the atmosphere at the very high altitudes sampled by micrometeorites is extremely thin," Tomkins said. "We are not talking about generating large amounts of oxygen here, but rather elevated proportions of oxygen relative to the other gases."

"Methane is thought to have been produced by early single-celled organisms known as methanogens. These exist today as well," Tomkins said. "There has been a lot of debate as to how much methane there might have been, and when it might have first arisen. The general thought is that the methane, combined with carbon dioxide, may have created an organic haze if the conditions were right."

The next step "is to try and extract micrometeorites from rocks of a range of ages, to examine how the chemistry of Earth's upper atmosphere might have changed over very long periods of geological time," Tomkins said. "It should be possible to use micrometeorites to investigate changes in atmospheric composition across very broad periods of time."

"It should also be possible to find micrometeorites on Mars," Tomkins added. "If the rovers can find them, and somehow determine their age of atmospheric entry, they could be used to investigate changes in Mars' atmosphere."

The scientists detailed their findings in the May 12 issue of the journal Nature.