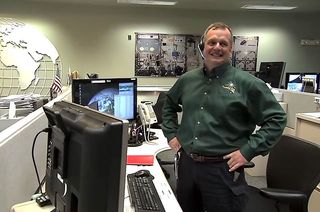 Timothy "TJ" Creamer is the first astronaut in NASA's history to be named a flight director in Mission Control.
(Image: © NASA TV)

Timothy "TJ" Creamer, who this week joined the ranks of Christopher Kraft, Eugene Kranz and Glynn Lunney as one of NASA's flight directors, is no stranger to Mission Control.

Over the course of his 20-year career at NASA, Creamer has been certified as a capsule communicator, "capcom" — the flight controller that relays commands to the crew members in space — and for four years, led the team that coordinates science operations on the International Space Station as the payload operations director at the Marshall Space Flight Center in Alabama.

And, oh yes, he also worked closely with Mission Control during his 161 days living onboard the space station as an Expedition 22/23 flight engineer in 2010. [The Most Extreme Human Spaceflight Records]

Creamer is the first-ever astronaut-turned-flight director in the more than 50 years NASA has been assigning people to fly into space and others to oversee their missions from the ground.

"This group of flight directors represent an amazing wealth of operational experience and demonstrated leadership," said chief flight director Norm Knight in a statement. "The critical role of [a] flight director cannot be understated and I could not be prouder to have them join our team."

NASA's flight directors lead teams of controllers, research and engineering experts and support personnel around the world from within the rooms of the Christopher C. Kraft Jr. Mission Control Center — named in honor of the first flight director — at the Johnson Space Center in Houston. They also are involved in space station cargo and crew vehicle integration and developing the plans for future exploration missions.

Creamer and his fellow new flight directors will oversee the teams of engineers monitoring the U.S. commercial cargo spacecraft as they resupply the space station, as well as the Boeing CST-100 Starlinerand SpaceX Dragon crewed transports now under development.

They will also help ensure the orbiting laboratory's crews have what they need to conduct research and help ready NASA for deep space exploration missions to destinations such as Mars as the Orion spacecraft and Space Launch System (SLS) rocket are prepared for flight.

Following the completion of the 2015 group's training and certification, NASA will have 27 flight directors supporting the station, exploration missions, commercial spaceflights and technology demonstrations. Before this class, 86 men and women had served as flight directors throughout the more than five decades of U.S. human spaceflight.