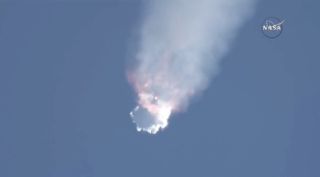 NASA Administrator Charles Bolden said that the agency is carrying out an independent review of the June 28 Falcon 9 launch failure, but using existing mechanisms rather than a separate panel.
(Image: © NASA TV)

In an Aug. 24 letter to House Science Committee Chairman Lamar Smith (R-Texas), Bolden said the appearance of special treatment accorded to SpaceX over Orbital ATK was a "misunderstanding" because NASA is taking a different approach to reviews of the two companies' launch failures.

"First and foremost, I want to assure you that NASA is performing an independent analysis" of the June 28 Falcon 9 launch failure on SpaceX's seventh cargo mission to the International Space Station under its Commercial Resupply Services (CRS) contract with NASA, Bolden wrote in the letter, released by the agency Aug. 25. [See photos of the failed SpaceX rocket launch]

Orbital's Antares rocket failed in October, also on a CRS mission to the space station.

Bolden's letter is in response to one by Smith Aug. 4, where he questioned NASA's decision to establish a formal independent review panel for the Antares failure but not for the Falcon 9 accident. Smith indicated that choice appeared to reflect favoritism towards SpaceX.

"The discrepancy between the approaches taken by NASA in response to these two similar events raises questions about not only the equity and fairness of NASA’s process for initiating independent accident investigations, but also the fidelity of the investigations themselves,"Smith wrote.

In his response, Bolden noted that immediately after the Antares failure, NASA decided to establish a formal independent review team.

While NASA was formally part of Orbital's own accident investigation board, Bolden said the independent review was intended to "inform and amplify the learning for the NASA team."

For the Falcon 9 failure, however, NASA instead elected to have the agency's Launch Services Program (LSP) lead the review into the accident. Unlike Antares, which has no other NASA contracts beyond its CRS flights, NASA has contracts for Falcon 9 missions beyond ISS cargo missions. That includes the launch of the Jason-3 satellite, which prior to the June failure was scheduled for launch in August.

Bolden wrote that William Gerstenmaier, NASA associate administrator for human exploration and operations, concluded LSP's review of the failure "would lead to an in-depth understanding of the events." It would also, he said, be an efficient use of resources, since NASA's commercial crew program is also interested in the investigation.

Bolden’s response to Smith included an Aug. 3 "memorandum for the record" from Gerstenmaier discussing his decision to let LSP lead NASA’s investigation into the Falcon 9 failure. "Their experience and understanding of the Falcon 9 system for NASA robotic missions places LSP in a unique position to most efficiently and independently evaluate the events that occurred on CRS-7 that led to its failure and to ensure that the resulting corrective actions are implemented appropriately," he wrote in the memo.

Unlike the Antares investigation, NASA does not have a full voting representative on SpaceX's accident investigation board. However, Bolden said that NASA still has “leverage” over the report’s findings because of its other launch contracts, which give the agency the right to accept or reject the findings of that investigation and any corrective actions before allowing those launches to take place.

That difference in approaches in NASA’s independent reviews of the failures, Bolden acknowledged, may not have been clear to Smith and others. “Note that due to this misunderstanding, many of the questions posed were written under an incorrect premise that NASA is not conducting an independent review” of the Falcon 9 launch failure, he wrote, referring to a set of questions in Smith’s letter.

Neither company has formally completed their investigations into their respective launch failures, but both have identified their likely causes. Orbital ATK executives said earlier this year they traced the cause of the Antares failure to excessive bearing wear in the turbopump of an AJ-26 first-stage engine, but have not disclosed what caused that wear. Orbital is replacing the AJ-26 with the RD-181 engine, and expects the Antares to return to flight in early 2016.

SpaceX Chief Executive Elon Musk said in a July 20 briefing that the company believes a strut holding down a helium bottle with an upper stage propellant tank failed, causing the tank to overpressurize and burst. Musk said at the time that the Falcon 9 could return to flight as soon as September, but the company has not yet announced a launch date.