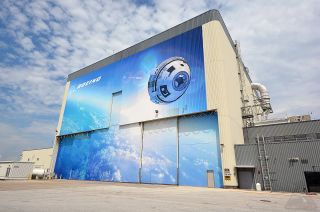 Boeing's Commercial Crew and Cargo Processing Facility, or the C3PF, will ready the CST-100 "Starliner" for flight.
(Image: © collectSPACE.com)

CAPE CANAVERAL, Florida — Boeing rolled open the doors to its new commercial spacecraft processing facility on Friday (Sept. 4), celebrating the grand opening of the re-purposed space shuttle-era building and revealing the name of the crewed capsule that will be assembled for launch inside.

The ceremony, held inside the facility at NASA's Kennedy Space Center in Florida, marked a milestone for the space agency's partnership with Boeing to develop and operate a new spacecraft capable of ferrying astronauts to and from the International Space Station. As the building-size mural added to the hangar displays, Boeing's Commercial Crew and Cargo Processing Facility, or C3PF, will be used to ready for launch the company's CST-100 — now named the "Starliner" — for flights into Earth orbit.

"When the shuttle program went away, we had this facility available for us to use," remarked Chris Ferguson, who as a NASA astronaut commanded the final shuttle mission in 2011 and is now deputy program manager for commercial crew operations at Boeing. "We cleaned this all out, took a lot of the services out of here, took a lot of the plumbing, put in new facilities and we are getting ready to now build our crew module and our service module." [CST-100 Starliner: Images of Boeing's Private Space Capsule]

Boeing's newly named Starliner is one of two commercial spacecraft that NASA has issued contracts for to resume U.S.-based crewed launches to the space station. Boeing and SpaceX, the latter with its Dragon crew capsule, are working toward launching their first flights in 2017.

"I couldn't be more excited than to be here," said NASA chief Charles Bolden. "I congratulate the entire Boeing and NASA team that has made this milestone possible. I know we have a bright future ahead, and I can't wait to see our astronauts board a Boeing spacecraft bound for space."

Built in 1986 to serve as a space shuttle maintenance and refurbishment facility and then upgraded to be the third of the orbiter processing facilities (OPF-3) at Kennedy Space Center, the modernized C3PF now provides about 78,000 square feet (7,300 square meters) of processing and manufacturing areas — the same space as about 30 average-size American homes.

"Just a few years ago, this building was the base for the space shuttle Discovery," said Senator Bill Nelson (D-FL), who flew aboard the space shuttle as a congressional observer the same year the C3PF was first built. "If these walls could talk, what a story they would tell — now they begin to tell about a new chapter in our space history."

That new chapter begins with Boeing's transition from the design to production and integrated testing of the CST-100 Starliner.

"Today, we're in the middle of producing the structural test article, the first piece of fully flight design hardware," said John Mulholland, vice president of commercial programs at Boeing. "We've got an upper and lower dome, a tunnel and hatch that are ready to be assembled and shipped out to the test site."

Later this year or by early next year, the major components of Boeing's next crew module will arrive at the C3PF, and by next May, the company expects to power on the first fully functional Starliner.

"Immediately after that, we will be in full production for the first crew module that's going to go to space," Mulholland said, referencing an uncrewed test flight planned for May 2017. "We now have a clear path to regaining domestic launch capability."

Boeing initially plans to build three Starliner crew modules, each intended to fly 10 missions. The CST-100 Starliner will launch on a United Launch Alliance Atlas Vrocket and return from space under parachutes to a touchdown using airbags at landing sites in the western United States.

The opening of the C3PF coincided with Boeing's yearlong celebration of its first 100 years as a company.

"As I think about our centennial coming up, I am always reminded of points of history," stated Dennis Muilenburg, the president and CEO of Boeing. "You get a sense that at this point we are witnessing something that we are all going to remember decades from now."

"This is a point in history that reflects a new era in human spaceflight," he said.

It was with that optimism that Boeing selected "Starliner" as the name for the spacecraft that will take the company into its next century.

Pearlman attended the C3PF grand opening in part for Space.com on a trip paid for by The Boeing Company.