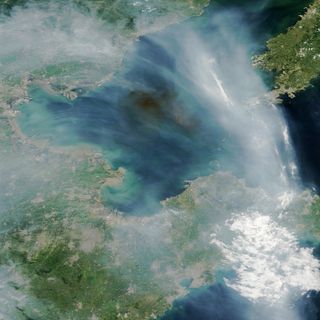 A black plume of smoke hangs over the Bohai Sea after the massive explosions in Tianjin, China.
(Image: © Joshua Stevens/NASA)

Smoke from two massive explosions that rocked the Chinese port city of Tianjin on Wednesday (Aug. 12) floated east over the Bohai Sea before heading south toward the Shangdong Peninsula, NASA satellite images reveal.

The images, captured yesterday (Aug. 13) at 2:30 p.m. local time in Tianjin, show a dark plume snaking across the sky over the blue waters of one of the world's busiest seaways. East of the plume, white clouds stand out in stark contrast to the black smoke.

The source of the smoke was likely the industrial fires that burned after the explosions that took place at a warehouse near the city's port that was reportedly storing "dangerous and chemical goods," according to a BBC News report. [Earth from Above: 101 Stunning Images from Orbit]

The cause of the explosions remains unclear, but firefighters had reportedly been called to the warehouse earlier to put out a fire there, according to the BBC, which states that chemical reactions between materials known to be stored at the warehouse and water from the fire hoses may have caused the deadly explosions.

More than 50 people have been reported dead in Tianjin since Wednesday, with hundreds more injured.

As the industrial fires burned in Tianjin, forest fires farther east also caused smoke to rise over China, according to NASA. The gray strands of smoke visible in the satellite images are likely due to these fires, the agency stated on its website.

NASA's Earth-watching satellites are used to track fires and other human-caused or natural disasters all over the world. Last year, the agency posted images showing smoke from wildfires engulfing Southern California, for example. More recently, satellites have snapped images of the fires blazing in Northern California, as well as other Western states, which are available on the agency's website.